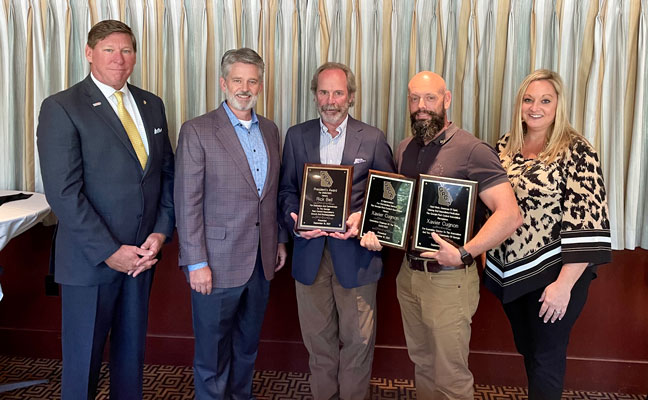 The Georgia Pest Control Association (GPCA) recognized three Arrow Exterminators employees who have consistently contributed to the achievement and progress of the pest control industry.

Vice President of Governmental Affairs Rick Bell, Vice President of Human Resources Xavier Cugnon and Marketing Coordinator Tyler Russell were all recognized for their achievements and leadership at Seasons 52 restaurant in Dunwoody, Ga.

Rick Bell, former GPCA president and current co-chair of the guardians and legislative committees, was given the President’s Award, presented to an individual who has been most helpful to the president during his or her term.

“Rick Bell has been an ally and friend, and someone I could ask for honest feedback on matters with the association, as well as gain insight regarding future ways to improve GPCA,” said Brantley Russell, GPCA’s current president and regional VP for Arrow Exterminators. “Rick has been outstanding this past year in aiding me, and I could not be happier to present him with this honor.”

Arrow Exterminators team member Xavier Cugnon, who is currently serving as co-chair for the Georgia PestVets Committee, was presented the Presidential Special Award and the Committee of the Year Award.

The Presidential Special Award is given to an individual who stood out during the term of the president.

Brantley Russell described Cugnon as “a very passionate individual who is consistently looking to help others and provides ideas that impact not only the pest control industry but the communities we live in.”

Cugnon has advocated for the veteran’s community by looking for new ways to help them including coat drives, food drives, home build projects, golf tournaments to raise money for the community and more. Along with being involved with the Georgia PestVets Committee, he is also heavily involved with the Veteran’s Committee for Arrow Exterminators.

“With Tyler’s background in mass communication and marketing, he has helped the association drive targeted traffic to our website and social channels from individuals, members, and non-members,” Brantley Russell said. “It is critical to keep our audience informed and up to date with what our organization has to offer. GPCA and its members are the beneficiaries of his time and talent.”

“We are so very proud of our incredible team members for all of their industry accomplishments.  It is an honor to watch their leadership and professionalism get recognized with such well-deserved accolades,” Emily Thomas Kendrick, CEO of Arrow Exterminators, said. “Their enormous support and contributions to the Georgia Pest Control Association have helped us all raise the bar for professionalism and integrity within the industry as a whole.”