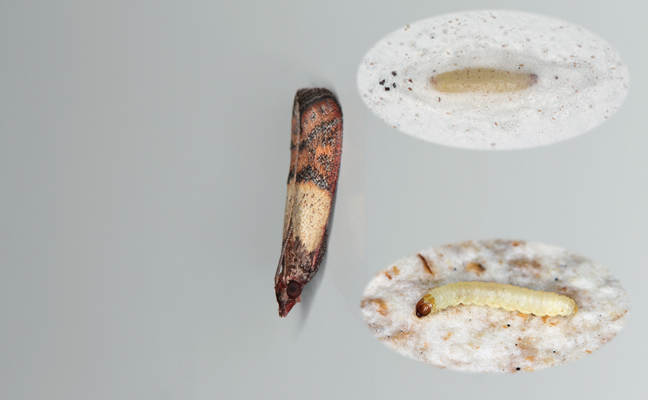 A visit with an Indianmeal moth (Plodia interpunctella).

Pest Management Professional magazine (PMP): What is that flying around? Whatever it is, it sure isn’t a very strong flier. Oh, it’s our guest, the Indianmeal moth!

PMP: Well, thanks for joining us. Tell me, what does “Indianmeal” mean?

IMM: It’s just an outdated way of saying cornmeal. An early researcher found us feasting on the meal of indigenous corn in the fields, and the name stuck.

PMP: But your diet is much more varied than that, right?

IMM: Absolutely. We feed on many grains, including cereals, powdered milk, dried fruit, dried floral arrangements, pet food, candy, cookies and crackers. We do still enjoy the dried corn decorations people display in the fall, though, too.

PMP: Let me ask about your biology. What is your life cycle?

PMP: It’s been said that the key to finding a source of IMM adults usually is not in the food itself. Could you explain why that might be?

IMM: It’s because the last-instar larva leaves the food source and wanders to find a protected site to pupate. Then the adults emerge.

PMP: Ah, so that is why when we either treat a pantry or remove what we think are all the infested material, adults suddenly show up.

IMM: Exactly. In a pantry, one of our favorite places to pupate is underneath the base of a fluorescent overhead light — right between the light and the ceiling. Pull that light down for inspection, and you’ll probably find webbing, which is a telltale sign that pupae were there.

PMP: Interesting. (Leans in, conspiratorially.) Tell us one of the secrets of your survival. Right now, we know you feed in generally unseen areas, pupate in unseen areas, and emerge from maybe unseen areas.

IMM (Looks around before whispering): Decoys.

IMM: Yep! We often are mistaken for clothes moths, so people think they have clothes moths and start tearing apart their bedroom closets. To make matters even worse, the early evening — the best time to see us flying —often is when people are going through their clothes trying to find a source. We show up because we follow the light. The larvae and pupae aren’t even in the same room. Isn’t that a great trick?

PMP: Wow, thanks for the insight. Shifting gears a little, what is the most feared control measure?

IMM: A trained technician who loves the hunt and is not easily fooled. For tools, I’d say all control measures work.

PMP: Interesting. Thank you for your time.

IMM: Thanks for having me.

The beetle formerly known as anobiid