A female Jorō spider is suspended in entomologist Will Hudson’s yard in Winterville, Ga. The invasive spider is harmless to humans, and researchers are examining its impact on local ecology. Photo: University of Georgia College of Agricultural and Environmental Sciences

Greg Holley, owner of Zone Pest Solutions in Buford, Ga., reports an emerging spider species that can make back porches “look like Halloween” with their massive webs: the Jorō spider (Trichonephila clavata), an Asian orb weaver species that is becoming prevalent in northern Georgia and western South Carolina since its U.S. arrival approximately 7 years ago. According to a Sept. 29 article in USA Today, the palm-sized spider is theorized to have hitched a ride “in a shipping container from China or Japan.”

“The first infestation in the U.S. was in Jackson County, Ga., and they have been sighted frequently since then,” Holley tells Pest Management Professional. “You know you’re dealing with Jorōs when you walk around the house — typically, you’d find one orb weaver web. You’ll easily encounter 30 Jorō webs, practically on top of one another.” 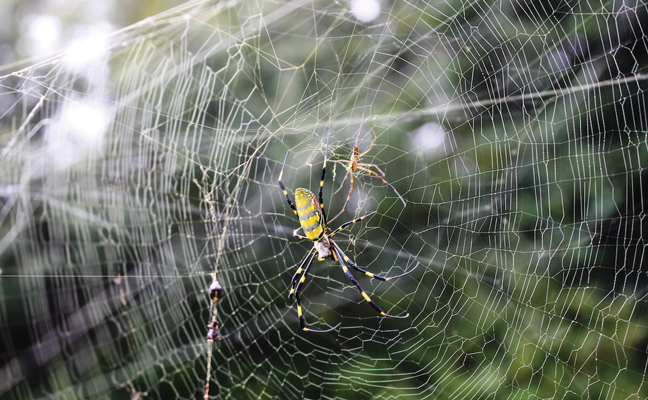 A large adult female Jorō spider is positioned next to a much smaller brown male spider in a web. Photo: University of Georgia College of Agricultural and Environmental Sciences

Although they’re more of a nuisance than a public health threat, Holley says, Jorōs are a particular problem on boat docks. “We’ve always trained technicians to clear webs at an account as a best practice,” he adds, “but now they’re becoming even more diligent about it.”

In the USA Today article, University of Georgia (UGA) entomologist Dr. Nancy Hinkle said most of the spiders will die off in November, but rebound when their egg sacs hatch in the spring. At press time, researchers at both the UGA and Clemson University are keeping an eye on the invasive species — and its voracious appetite for insects, especially stink bugs — to ensure it doesn’t negatively affect local ecologies. Watch a short video the UGA produced about the spider on YouTube. 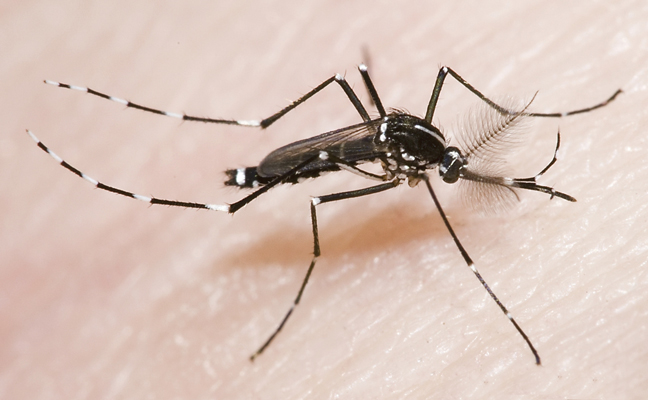 It’s common knowledge that only female mosquitoes drink blood, whereas males feast on nectar. But a recent study published in the Journal of Medical Entomology finds that males can still be pesky while posing less of a public health threat. Rather than avoiding people, males gravitate toward them because, as research co-author Dr. Perran Ross, University of Melbourne in Australia, notes in an article on TheConversation.com, they’re seeking females. And because females are seeking people, that’s where the action is: “Some just want you as their wingman, whether you like it or not.”

In a study published by the Journal of Medical Entomology, researchers from The Ohio State University discovered that certain western state specimens of the American dog tick (Dermacentor variabilis), differ in physical and genetic attributes to the point that they are now their own species, D. similis. As reported by EntomologyToday.org, both species are capable of transmitting the bacteria that cause Rocky Mountain spotted fever. However, each could be vectors for different pathogens, as well.