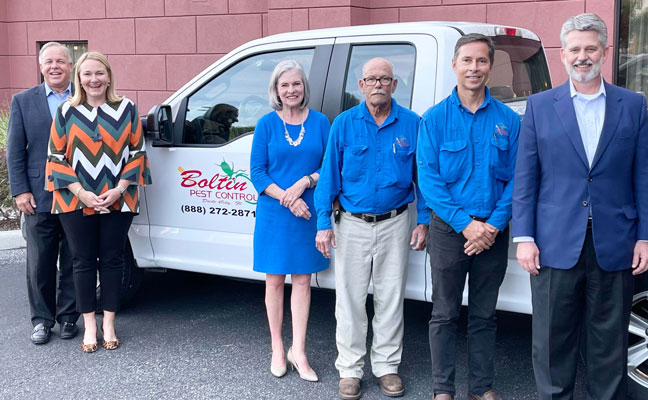 This transaction will provide Arrow Exterminators with the opportunity to strengthen its presence in Hillsborough and Pasco counties. It will serve both residential and commercial customers in the fast-growing and expanding northern side of the Tampa Bay metropolitan area.

“We are thrilled to welcome the customers and team members of Boltin Pest Control to the Arrow family,” said Emily Thomas Kendrick, CEO of Arrow Exterminators.

Founded in 1968 by “Bo” Boltin, his wife, Lacy Boltin, is the current owner and president.

Family-owned and -operated since 1964, Arrow Exterminators is a pest and termite control company. Chaired by Joe Thomas, a Pest Management Professional Hall of Famer (Class of 2009), the company has a fleet of more than 2,550 vehicles, 149 service centers and 2,900 team members with revenues exceeding $310 million. The company has locations throughout Alabama, Arizona, Florida, Georgia, Kentucky, Louisiana, Mississippi, North Carolina, South Carolina, Tennessee, Texas and Virginia.

Bug Out transitions to Active Pest Control in Georigia