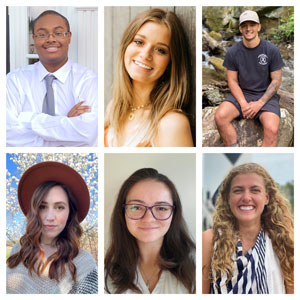 Here are the six recipients of the 2021 E. Raymond Crim III Scholarship:

Payton Binns is currently enrolled at Keiser University, Sarasota, Fla. Binns is a part of the U.S. Army Reserve, and plans on continuing his education toward becoming a nurse.

Bryn Foster is currently enrolled as a senior at the University of North Carolina at Chapel Hill. Foster is double majoring in biology and public policy, with a minor in sustainability studies.

Madison Payne is currently enrolled as a sophomore at Virginia Polytechnic Institute and State University (Virginia Tech). Payne works as an undergraduate researcher in the Gillaspy Lab at Virginia Tech to help further her biochemistry major. After graduation, she plans to attend graduate school with a focus on plant research.

Mary Janell (MJ) Tredway is currently enrolled at Lee University, Cleveland, Tenn. After graduating with a psychology degree and a minor in sign language, she plans to work with special needs children. Aside from her studies, Tredway is a Division II lacrosse athlete; this summer, she plans to travel to the United Kingdom to play in a lacrosse tournament with Lee University.

Isabelle Zoeller is currently enrolled as a junior at Millikin University, Decatur, Ill. Zoeller is pursuing a bachelor of fine arts degree in stage management, with a minor in psychology. Her ultimate career goal after graduation is to secure a position on a Broadway production.