Pest Strategies conducted a survey to learn more about how individuals react when they encounter pests. 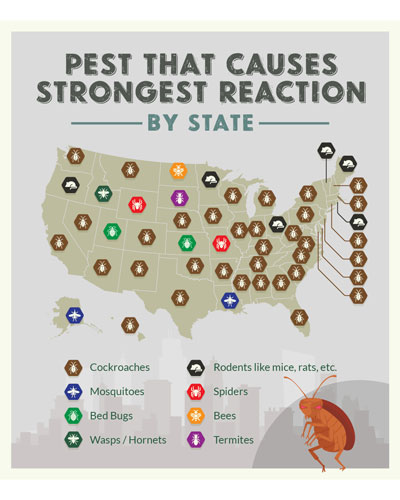 Pests that cause the strongest reaction by state in the U.S. IMAGE: PEST STRATEGIES

In second with 17.3 percent was rodents such as mice and rats. Spiders came in third with 14.3 percent while gnats (1.1 percent) and termites (1.2 percent) were the two pests that were least likely to elicit a strong emotional reaction.

When analyzing the data, size seemed to be a factor in determining how strong of a reaction a person will have, according to Pest Strategies. Cockroaches and rodents are significantly bigger than gnats and termites.

While respondents noted a wide range of reaction to seeing these pests tip top five were:

Surprisingly, 3.8 percent of respondents noted that their first reaction to seeing a pest is delight. 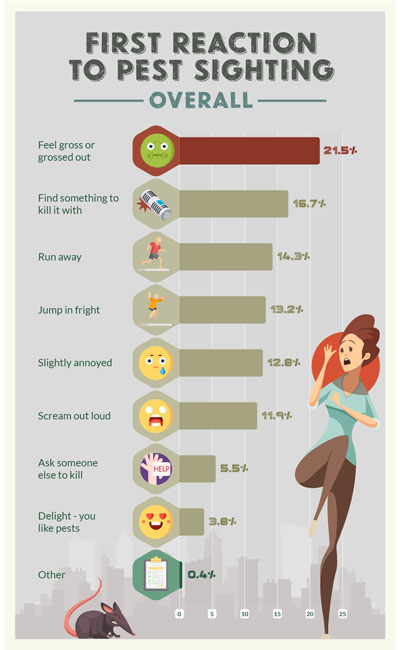 Respondents were also asked what their response is to seeing a pest. This is different than the previous question in that this was focused on actions rather than emotions.

When looking at the data by state the most common response among 31 states is to crush a pest after seeing it. New Hampshire was the only state that put the pest control as the first choice.

Even in states such as South Dakota, where the most commonly despised pest was one that necessitates professional pest control services (termites), the most common response was to spray them with something

Similarly, in states such as Delaware and Kansas, where bed bugs were the most likely to elicit the strongest emotional reaction, the most common tactic for handling the pest was to simply crush it. Given the significant property damage that termites and bed bugs can cause, as well as the difficulty involved in eliminating infestations, individuals in these states are still more likely to attempt to handle the pests themselves rather than call the professionals. 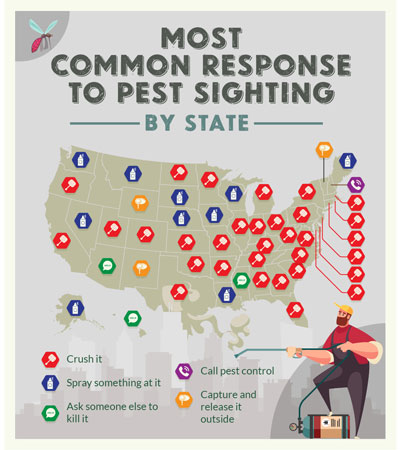 Please Fill Out The Following Fields.

Out of male respondents, 32.8 percent said they would crush the pest, versus just 21.7 percent of female respondents. On the other hand, women were more likely to ask someone else to kill the pest (24.9 percent) compared to men (5.6 percent). Men were also much more likely to spray something at the pest (23.9 percent) compared to women (19.5 percent).