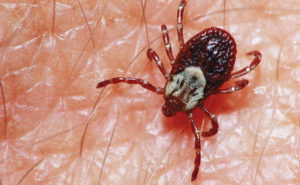 Cedar-lined chests and closets have long been used to keep clothes moths away, but researchers are finding that cedarwood oil might also repel another pest: ticks.

Cedarwood oil, which can be found in many consumer products, including perfumes, soaps and deodorants, is known for its pleasing scent — as well as for its insect-repelling and anti-fungal properties.

According to the study by Agricultural Research Service (ARS) scientists at the National Center for Agricultural Utilization Research in Peoria, Ill., it compared the results of the nymph stages of five, hard-bodied tick species to various doses of cedarwood oil to diethyltoluamide (DEET), an active ingredient found in many repellent products.

Found in the heartwood of Eastern red cedar and other juniper tree species, cedarwood oil is among a variety of natural products that the researchers are testing as potentially sustainable pest control methods.

Ticks not only hunger for blood but can also transmit disease-causing pathogens as they feed. One notable culprit is the black-legged tick (Ixodes scapularis), whose bite infects nearly half a million people annually with the bacterium that causes Lyme disease. To make matters worse, some ticks, such as the lone star tick (Amblyomma americanum) can induce alpha-gal syndrome, a condition in which the person bitten by the tick develops a severe allergy to meat from livestock and other mammals.

The researchers found that different species of ticks exhibit different degrees of susceptibility to cedarwood oil. For instance, the black-legged tick was the most susceptible of the four tick species exposed to cedarwood oil in the experiments. The others, in order of decreasing susceptibility were: brown dog tick (Rhipicephalus sanguineus), American dog tick (Dermacentor variabilis) and lone star tick (A. americanum).

To test for repellency or toxicity to the ticks’ nymph stages, scientists treated small pieces of filter paper with microgram amounts of cedarwood oil and placed the papers on short vertical rods. They then released the nymphs and recorded what happened to them upon crawling up the rods and contacting the treated paper. Contact with the oil-treated papers repelled 80 to 94 percent of black-legged tick nymphs, meaning they retreated, moved more slowly or dropped off the rods.

However, the oil’s repellency faded with time. More of the nymphs repelled 80 percent to 94 percent. Results such as these are important considerations in formulating the oil as a repellent product that can be applied to bare skin or clothing, for example.

In the experiments, DEET was more repellent than the cedarwood oil for all tick species except the black-legged tick nymphs. Against them, the oil worked just as well.

Full details of the work were published in the journal Experimental and Applied Acarology by Dr. Lina Flor-Weiler, Dr. Robert Behle, Dr. Fred Eller, Dr. Ephantus Muturi and Dr. Alejandro Rooney — all of ARS. Additional tests are necessary to determine the optimal doses to use and delivery method, they noted.

Their tests also re-affirmed the benefits of using a procedure called supercritical fluid extraction, which relies on carbon dioxide to penetrate deeply into cedarwood shavings or sawdust where reserves of the oil can be removed without degrading its quality. Typically, a method called steam distillation is used. However, an ARS news release reports, it is inefficient and degrades the oil during the process.

Starting in the early 2000s, Dr. Eller, together with Dr. Jerry King (formerly ARS) showed that carbon dioxide supercritical fluid extraction could yield 30 percent more cedarwood oil than steam distillation. More recently, using carbon dioxide also resulted in a three-fold increase in the oil’s concentration of cedrol, a biologically active ingredient that plays a major role in not only repelling ticks, but also fire ants and other insects.