The beetle formerly known as anobiid 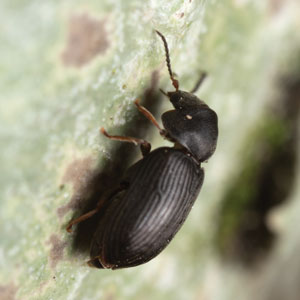 Pest Management Professional magazine (PMP): This month, we are going to have a brief conversation with one of the most common powderpost beetles encountered, the beetle formerly known as anobiid. It now goes by ptinid. Let’s get started. Tell us a bit about yourself.

Anobiid (A): Well, we are sometimes mistaken for stored product beetles because of our shape, so we are pretty good at confusing the inspector who doesn’t take the time to properly identify “evidence.” We typically infest soft woods, but have been known to also frequent hardwoods.

PMP: Then you are known more for structural wood infestations in homes rather than, say, oak dressers?

A: That is correct. Lyctinae powderpost beetles seem to have cornered the reputation for infesting hardwoods, but we have worked our way into the hardwoods. Our emergence holes look similar, so unless you are a research scientist, the type of reinfesting powderpost beetle might not be all that important. Remember, seasoned inspectors rarely will see the beetle; it is the damage that is the evidence.

PMP: As I understand it, you lay eggs on the wood and the emergence holes appear after the life cycle is complete and adults are emerging. Is that correct?

A: That is correct. Also, any dust or frass emerging from the holes might feel gritty to the touch and have the color of fresh wood. The hole edges will eventually oxidize and darken, so if the edges are light in color compared to the wood, you likely have recent activity.

PMP: Good to know. How about wood moisture? Is a moisture meter helpful to determine risk to the wood?

A: Spending a few dollars on a good moisture meter will really improve the quality of inspection. We prefer wood that is average in moisture, but we need more than 13 percent moisture to develop. So moist wood in sheds, garages, basements and crawlspaces where air is not conditioned is attractive to us.

PMP: Can you really do some damage in these areas?

A: You wouldn’t have asked for a conversation if we weren’t a concern to your industry, right? Yes, while houses might not collapse, we can seriously undermine the integrity of wood. We are a formidable structural pest.

PMP: What is your most feared treatment method?

A: There are two types of treatments. Many insecticides are labeled for wood treatment. In extreme cases, fumigation might be necessary. There are no baits for our ilk.

PMP: Let’s briefly talk about your name change. How did that happen?

A: First, everyone should remember that we have been around a lot longer than the work of Carolus Linnaeus, who in the 1700s developed the system of classifying organisms via binomial nomenclature. We were assigned to Anobiidae, but recently we were reassigned to the family Ptinidae. You know how taxonomists love to argue! They finally settled the debate.

PMP: Does that matter to you?

PMP: All very interesting. Anything else?

A: The next time you swing yourself into a damp crawlspace and grab a joist and a piece of it breaks off and you are looking at it dazed, just remember: We were there!

PMP: Our industry not only sells service, but also shows the customer our knowledge. This was very helpful.