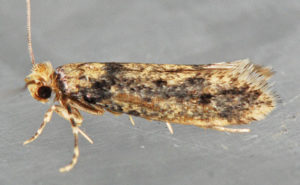 Insects Limited released its annual list of the Top 15 clothes moth cities in the United States for 2021.

According to the news release, the top two cities for clothes moths remained unchanged. New York City and Boston, Mass., are still the two leading spots and have held these spots for five years straight, ever since the rankings began in 2017.

Overall, the Northeast Coast of the United States remains a stronghold for clothes moths with New York City, Boston and Philadelphia, Pa., in the top three spots, while Washington, D.C., is at No. 13. 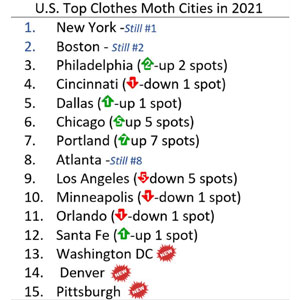 To treat clothes moths, it’s important to know what to look for in identifying clothes moth activity. Finding and eliminating the moths early in an infestation can prevent years of battling these pests if they are allowed to get out of control in your home. Pheromone traps are a good means of identifying and locating problems, but knowing the telltale signs of the frass and moth webbing produced by the larvae after eating the clothing and rugs, can prove extremely valuable in early detection.