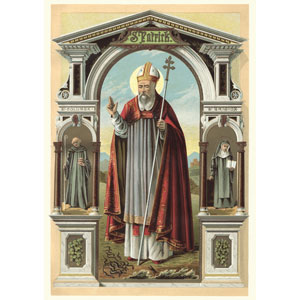 St. Patrick is considered the patron saint of pest management professionals (PMPs), even though the legend of him running snakes out of Ireland is probably untrue.

St. Patrick arrived in Ireland as a slave, then as a missionary who brought Christianity to the island. Nearly 1,600 years later, he is celebrated as the patron saint of the Emerald Isle and believed to have eliminated snakes from the island.

But according to a History on the Net podcast, he didn’t actually eliminate snakes from the island. Historians theorize that the legend makes sense if you replace snakes with pre-Christian paganistic beliefs.

St. Patrick isn’t the only pest-related patron saint, however. Here is a look at a couple more:

• March 17 not only marks St. Patrick’s feast day, but also St. Gertrude of Nivelles, who is the patron saint of cats. There is no official documentation of this from the Vatican; rather, the first known association of her with cats goes back to 1982 with the publication of a catalog on “metropolitan cats” by the Metropolitan Museum of Art in New York.

The likely reason she’s now the “cat lady saint” is St. Gertrude’s association with rats and mice, according to the U.S. Catholic website. Representations of St. Gertrude going back to the Middle Ages portray her with rodents scurrying around her feet, or running up the staff of her crozier (a curved staff).

St. Gertrude’s intercession to ward off disease-carrying rodents would have made her an important saint to call upon when much of Europe was decimated by bubonic plague. And because cats are the animal most people think of as the natural predator of rats and mice, it doesn’t take much of a leap to extend St. Gertrude’s patronage to protecting cats.