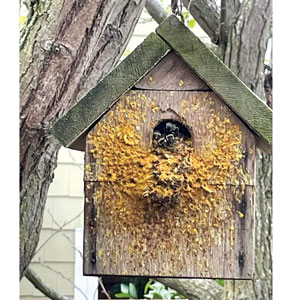 One of Creager’s clients snapped this photo of a birdhouse in his backyard, noting it only took a few weeks to get this way. Photo: Rodrigo Balmaceda

Almost 10 years ago, when Kimberly Creager retired from more than three decades as a union carpenter in Fairfield, Calif., she took up a new hobby. Or perhaps more correctly, the hobby — beekeeping — took up with her.

“A friend of mine wanted to get rid of his hives, which had fallen into a bit of disrepair, to be honest,” she explains. “I thought, ‘Well, I can take them and when I get around to it, I’ll take a closer look, clean them up, purchase some bees and get started.’”

Before she had a chance to “get around to it,” though, two honey bee colonies moved in. She says her first thought was, “I guess I’m a beekeeper now!”

Creager decided to learn as much as she could about the proper care and maintenance of honey bees. She joined a local association, where she met another retired carpenter/beekeeper who also became her mentor, Wayne Scott. Scott, who passed away earlier this year, had a part-time business offering swarm removal. Creager was intrigued. 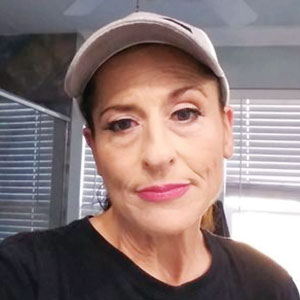 Kim Creager also is the adminstrator for the “Women and Men in Swarm Removal” group on Facebook.

“I asked him if I could apprentice with him for a year, and he agreed,” she says, noting he helped her get her own swarm removal business, Bees Kneeds, off the ground.

While Creager’s company focuses mainly on honey bees, in February she encountered a backyard birdhouse full of bumble bees. “Bumble bees change locations pretty much every year, and these girls moved in around January when we had some warm weather,” she explains. “There was a lot of yellow wax on the front of the little house, which we thought was kind of neat. We think it was used as a scent trail for the colony.”

Creager says an estimated 250 to 300 bumble bees built a home inside the birdhouse one blade of grass, strand of hair or piece of string at a time. But they likely didn’t take the house by storm, she says, adding, “the previous bird occupants either grew up or migrated.” 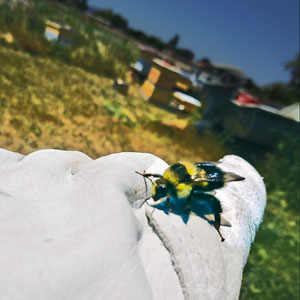 “I raise honey bees, but I love bumble bees because they are so fun to watch ‘bumble’ their way around,” Kim Creager says. PHOTO: BEES KNEEDS

Creager says this was an easy job to do, as she could take the birdhouse and relocate it from Clayton, Calif., to a friend’s multi-fruit tree orchard about 40 miles away, in Vacaville, Calif.: “Sometimes it’s hard to relocate bumble bees, but the orchard owner used to be a beekeeper. He planted 50 trees that would bloom at different times of the year so something is in bloom all year long.”

Another bumble bee relocation option Creager sometimes uses is on her own ranch, using abandoned gopher holes in areas where they won’t bother the neighbors.

Creager says bumble bee calls have been on the rise in recent months. “We have a lot of situations where they carry a blade of grass at a time to make a nest in exterior exhaust pipes for stoves,” she explains. “The clients don’t notice until their exhaust fan doesn’t work as well as it used to, and then stops altogether because the pipe is plugged with grass.”

But Creager loves the thrill of the chase and the satisfaction in relocation. “To me, it isn’t like work. It’s a lot of fun,” she says.