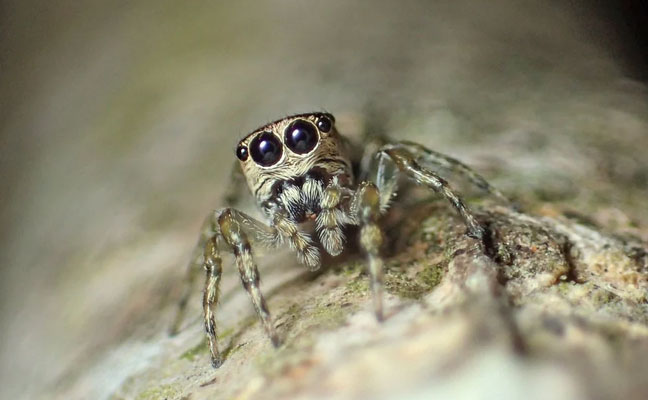 Scientists discovered a new species of spider, bringing the worldwide count to 50,000 species. Expects from the Natural History Museum of Bern in Switzerland suspect that many more spiders are waiting to be discovered.

The new spider, Guriurius minuano, belong to the family of beady-eyed jumping spiders (Salticidae) and resides in scrubs and trees in some part of South America, according to Agence France Presse. The spider was first described by researchers in Brazil, and was reported to the World Spider Catalog.

Guriurius minuano was named after the Minuane people. According to the Agence France Presse, the now-extinct ethnic group lived in southern Brazil, Uruguay and Buenos Aires, the same regions where the arachnid is located. The jumping spider has a stripy pattern on its abdomen and large black eyes.

The very first spider species was described in 1757. In 265 years, experts have described 50,000 species. Arachnologists suspect that in less than 100 years, another 50,000 spiders will be discovered, according to CNET’s Amanda Kooser.

Jumping spiders are known for their ability to pounce on their prey. There are about 6,000 described species in over 600 genera of jumping spiders, making them the most prominent taxonomic family of spiders, according to Guinness World Records. These diverse, brightly colored and intricately patterned arachnids are typically found in the tropics, but some rare species also live in cold regions, including the Arctic.

Jumping spiders have the sharpest vision of their spidey cousins and use this advantage to stalk their prey with precision, reported Betsy Mason for Science News in October 2021. Some species of jumping spider can see ultraviolet light and blue and green colors, Live Science’s Stephanie Pappas reported in 2021.

Many members of the Salticidae family also have elaborate, animated courtship dances, often featuring vigorous body shaking and twitching of their eight legs. In 2012, a jumping spider of the species, Phidippus johnsoni, became the world’s first “spidernaut” and made the International Space Station its home for 100 days before returning to Earth to live at the Insect Zoo in the Smithsonian’s National Museum of Natural History. The spider was the first jumping spider to travel to space and successfully readjust to life on Earth. In the same year, the spidernaut died of natural causes.

Despite giving some individuals the creeps, arachnids are pest management professionals. It is estimated that spiders consume between 400 to 800 million metric tons of insects every year.