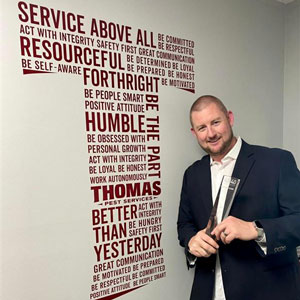 Thomas Pest Services’ President and Co-owner Bill Clark was named one of the Albany Business Review’s 40 Under 40 Class members of 2022.

According to the Albany, N.Y.-based publication’s website, “40 Under 40 honors rising stars and people you should know in the Albany region business community. These women and men are leaders in various companies, from some of the most notable companies in the Capital Region to smaller nonprofits or firms [one] may be hearing about for the first time.”

Clark began Thomas Pest Services more than a decade ago with his wife and co-owner, Sarah. At the time, they had just one employee and were running the business out of their basement. The company has since grown to service more than 3,600 regular clients who utilize recurring pest treatment programs from their home or business. Clark has helped lead the company from just $2,000 in annual revenue to $4.2 million in just over 10 years.

Thomas Pest Services is headquartered in Schenectady, N.Y., with one satellite office in Hudson, N.Y., which was launched in 2020 to mark the milestone of 10 years in business. The new location also helped the company adapt during the pandemic and anticipate more growth and change. The company employs just over 40 staff members, who come from all corners of the Capital Region of New York.

“I have watched Bill grow from a salesperson to a successful business owner,” Sarah Thomas-Clark said about her husband. “His most impressive quality is his personal appetite for growth and knowledge which fuels his success. He is always learning ways to make himself and his company better.”

As an example, she said, Clark recently led the company through the Entrepreneurial Operating System (EOS), which is a “set of simple concepts and practical tools used… around the world to clarify, simplify, and achieve [companies’] vision.” 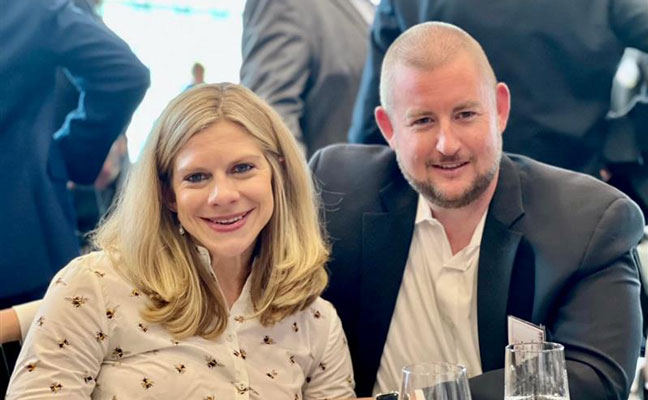 Bill Clark was named one of the Albany Business Review’s 40 Under 40 Class members of 2022. He co-owns Thomas Pest Services with his wife Sarah (left). PHOTO: THOMAS PEST SERVICES

“Coming to work every day is exciting. I’m proud of the company I’ve built with my wife, but I enjoy seeing our team grow professionally, and personally,” Clark said in a news release. “I am truly fortunate to work among team members who understand the importance of protecting our clients from the destruction and diseases associated with pests. I’m honored to be named among the 2022 Class of 40 Under 40, and only hope to inspire others to work hard for their goals.”

Clark has always had a passion for helping people, according to a news release. He realizes that without people, his achievements wouldn’t be possible. Clark said he wants to use Thomas Pest Services as a catalyst or vessel to achieve more for the greater good. He wants to allow his business to act as a conduit for his employees to go home after work and improve their personal life in some way.

March is National Cerebral Palsy Awareness Month, and the Clarks host a fundraising campaign to heighten awareness. Their daughter Riley, 7, was diagnosed with right side spastic hemiplegia at 18 months of age. While Riley has suffered impairment to her coordination and fine motor skills, the Clarks notes that “she has never let her disability bring her down. Riley is a fighter and attends weekly occupational and physical therapy to help with her condition.”

One of Clark’s biggest goals for 2022 is to launch “Project T,” which will become a means of providing pest control services to those who otherwise cannot afford them, such as a veteran who does not have the funds or an elderly couple who has bed bugs but are on a fixed income. Through support of vendors and the community, Clark hopes to create a fund to help pay for these types of services.