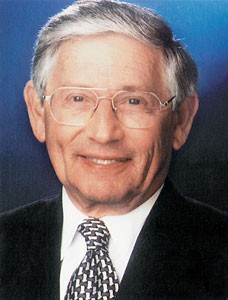 Pest Management Professional Hall of Famer Hal Stein (Class of 2005) passed away May 31 after a long illness. He was 90. What follows is his obituary as found on Legacy.com:

Harold (Hal to pretty much everybody) was a rare and surprising individual: He lived almost all of his life in San Francisco, Calif., yet had a worldly outlook; he spent his professional life in business, but was deeply philosophical; he distinguished himself in every endeavor, but was modest, generous, funny and kind. Hal was a mensch.

The younger son of Harold Sigfried Stein, Sr. and Jessie (Koch) Stein, Hal grew up with his older brother Laurence (Larry) attending San Francisco public schools, while working in and falling in love with his father’s family business, Young-Casselman pharmacy. He graduated from UCSF with a Bachelor of Science in Pharmacy, convincing Vera Livingston, his sweetheart from Washington High School — who would become his best friend, confidante and lifelong wife — to take up the family profession. After serving as a medic at Fort Sam Houston, Texas, during the Korean War, Hal returned to San Francisco with Vera, where children Deborah and Peter were born, and he joined his father-in-law, Eric Livingston, in the management of Crane Pest Control.

Hal took to business leadership as a natural, and would soon grow the company as its president and CEO, focusing its work on public health and safety in the commercial sector, and excelling as an admired leader in the industry, serving as president of its national trade association (NPMA) and a frequent adviser on public health and pesticide legislation at the California and federal levels. His signature “Executive Letters” – short musings on matters philosophical, environmental, social – often found their way into print as op-eds and even into the Congressional Record, emphasizing his lifelong concern: how a society builds a better quality of life for future generations.

Hal put his philosophy into practice in community, fraternal and philanthropic affairs. A dedicated 33° Freemason, he was a leader of the Masonic Research Society, helped establish the Scottish Rite Childhood Language Center, served as Grand Orator for the Grand Lodge of California, and in 2015 was awarded Freemasonry’s highest honor, the Grand Cross. In Jewish life, he was long active with the American Jewish Committee and the Union of Reform Judaism and served two terms as board president of San Francisco’s Congregation Emanu-El, where generations of clergy came to depend on his wise counsel and gentle leadership. His uncanny gift for public speaking without notes — delivering eloquent, funny and enlightening speeches in what seemed like extemporaneous observations — made him a much sought-after teacher in all his professional and community circles.

Despite his active public life, Hal was happiest pursuing his private passions: studying esoteric philosophy, “spinning the dials” on his shortwave radio, going fishing for salmon, attending 49ers and Sharks games — and, most of all, enjoying the love of his close family in San Francisco and Bodega Bay, including traveling the world with Vera and family. They, and all of the people he touched, will remember his unfailing kindness, moral clarity and gentle outlook, and miss his warmth, silly jokes, and smile.

He is survived by his extraordinary wife of 68 years, Vera Stein; children Deborah Stein Hoffman (Craig) and Peter L. Stein (Brian Freeman); grandchildren Jessia Hoffman and Gabriel Hoffman; and by his wonderful caregiving team of Joe, Dem, and Anna. Services were private, with a celebration of Hal’s life to come at a later date. Donations in his memory may be made to Congregation Emanu-El (emanuelsf.org), Jewish Family and Children’s Services (jfcs.org), or California Scottish Rite Foundation (ritecaresf.org).