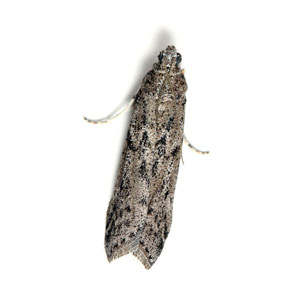 The Mediterranean flour moth is a pest in the home and in food-processing plants such as feed mills. Also known as a mill moth, it infests such items as flour, nuts, chocolate, beans and dried fruits.

Adults have a wingspan of about 1 inch. The front wings are pale gray, with wavy black lines running across them. The hind wings are a dirty white. It can be distinguished from the Angoumois grain moth (Sitotroga cerealella) because its hind wings are rounded at the tip, not pointed.

The Mediterranean flour moth is most easily recognized by its characteristic pose when resting. The front of the body is raised, giving the wings a distinct downward slope. The tip of the abdomen protrudes up between the wings. None of the other house moths have this characteristic pose.

Females lay their eggs in accumulations of flour or other milled products. The larvae hatch in a few days, and when mature, they measure about 0.5 inch long. They are white to pink, with a few small black spots on each body segment, from which the body hairs arise.

The larvae spin silken threads as they move about. These threads fasten particles together in a dense mat that is characteristic of this insect. Larvae often are found away from the infested product, seeking a crack or crevice in which to pupate.

Other scavenger species closely related to the Mediterranean flour moth include the tobacco moth (E. elutella), the almond moth (Cadra cautella), and the raisin moth (C. figulilella). All are found throughout the United States, and are similar in appearance and biology. They also may be found in similar habitats feeding on similar stored products. However, the tobacco moth is a serious pest of tobacco and is not often found in homes. The raisin moth prefers dried fruits and often infests these fruits outdoors while they are drying. Lastly, the almond moth prefers nuts and dried fruits, and is primarily a warehouse pest.