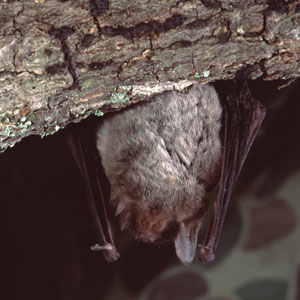 Pest Management Professional magazine (PMP): This month, we are pleased to welcome a very important vertebrate creature. It is furry, prefers night activity, and petrifies customers. Are we talking about mice? Rats? Nope. This month’s “Conversation Piece” features the bat! Welcome.

PMP: What strange eyes you have.

B: That’s because you are talking to my feet. Remember, we generally rest upside down.

PMP: Oh, right. Well, you are perhaps one of the most-feared vertebrates, yet you are small, generally do not attack humans, and you do such positive things. Why are you so scary?

B: Well, we can carry disease — including rabies — so always exercise caution around us, just as you would for any wild animal. But people fear us thanks to spooky stories and the fact that we can appear inside your home late in the evening.

PMP: You should be no scarier than any animal technicians encounter, but let’s talk about the good that you do.

B: Sure. First, we have a huge population. If you consider all species, bats account for over
20 percent of the mammals on Earth. In North America, there are just under 50 confirmed species, with just a few encountered by humans. We prefer living mostly in the wild, but we will enter attics, and even living spaces given a pathway. We are important pollinators of some fruits, and we feed on insects in most cases. We are nature’s insect control. Of course, habits vary by species.

PMP: That is fascinating. Tell me more.

B: Some species can consume thousands of insects each night. That’s a lot of insects. We have decent eyesight, so “blind as a bat” is a myth. So is the idea that we attack humans for a bloodmeal. We do emit high-pitched sounds like sonar, though, which allow us to navigate.

PMP: While we recognize the value of bats, nobody likes bats in their homes. You can be found in attics, and even a stray can get into the living space. How do we keep bats where they belong: outside, and not in someone’s home?

B: We can be pests if we show up at the wrong time and in the wrong place. Let me give you some tips first for your discussion with customers. Most importantly, rarely do bats attack humans. Understand that bats are good — until we interfere with humans. We don’t want to go into homes. To prevent us from moving in, look for squirrel damage up high that allows us to sneak in. Seal any holes before we find them.

B: If we already are in a structure, monitor our activities to help us get back to the wild. At dusk, look to see where to put exclusion devices so we can leave and not get back in. If you find holes where bats are entering, after bats leave for the night, seal them off.

PMP: What about the young bats?

B: Most colonies will have young in peak summer. We are more active during this period, and at the same time, young bats called pups are growing in the colony, being left behind after adults leave to feed at night. If you exclude the adults, the females cannot get back in to feed the pups, and they will starve.

PMP: Understood. In fact, many states and provinces have strict regulations on bat control, including prohibiting any work until the pups have grown and left.

B: That’s right. We are protected by law in many areas, so please get to know your local requirements.

PMP: Technicians also should remember that after bats are removed, guano (bat droppings) also should be removed. See public health websites for removal and disinfection guidance.

B: It’s fair to say bat control isn’t for the amateur.

PMP: Thank you for your time. It’s getting dark, so I guess you need to go.

B: I do, and thanks. Happy hunting!