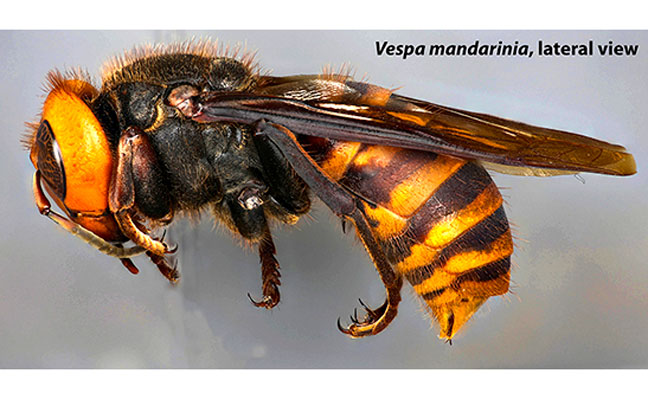 The exhibit explores how peoples’ experiences with nature inspire them as well as offering visitors a chance to learn about how dedicated scientists and community members work to protect the environment.

Among the objects in the “Our Places” exhibit is the actual Asian giant hornet “Nest Zero,” which was the first place these huge hornets set up housekeeping when they arrived in Washington from Asia in October 2019.

Asian giant hornets are a concern because sometimes they can feed on honey bees, consuming a colony in minutes. They also can deliver an extremely painful string to people, but only if provoked.

ARS developed a specialized lure and trap to attract and live trap the Asian giant hornets. APHIS provided a radio tracker to tie onto captured Asian giant hornets so they could be tracked back to Nest Zero. The nest was then dispatched and is now part of the exhibit.

Dr. Buffington, who is part of the ARS Systematic Entomology Laboratory at the Beltsville Agricultural Research Center, was instrumental in seeing that Asian giant hornet samples from Nest Zero were flash frozen and eventually placed in cryopreservation at the NMNH’s Biorepository in Suitland, Md.

“These hornets were moved directly into long-term preservation. They will be the genetic gold standard for comparing other Asian giant hornets found in this country,” Dr. Buffington said in the news release. Other ARS scientists have mapped their genome and will be comparing it to the genomes of Asian giant hornets from other locations with an eye to building a database that may contribute to refined identifications.

From his other office in the NMNH, Dr. Buffington helps curate the National Insect Collection as an expert on wasps and hornets. The Smithsonian and ARS have a long history of close cooperation and partnership on research projects.

“The National Insect Collection is our country’s record of what insects occur in the United States; without this essential resource we’d have no way of verifying that the insects we captured in Washington state were indeed Asian giant hornets, Vespa mandarinia, and not one of several U.S. native look-alike hornets that are not problems insects,” Dr. Buffington said. “That’s an important role, ensuring that non-native invasive insects that can damage our environment are properly identified and removed while not accidentally harming our native species.”