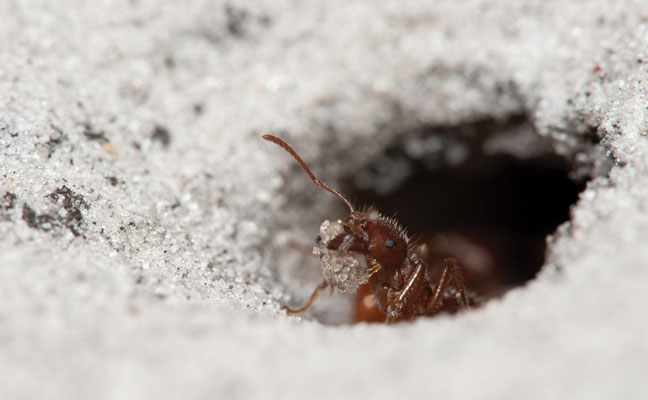 A Florida harvester ant. Photo: courtesy of, and copyrighted by, Gene White, pmimages@earthlink.net

Harvester ants are comparatively large, red to dark-brown ants that range from 0.25- to
0.5-inch long. They can be recognized by the long hairs that form a “brush” or “beard” under their heads. These hairs are used to clean their legs and antennae, carry water and seeds, and remove sand during nest excavation.

Harvester ants are polymorphic, with both major and minor workers. Some workers are known to lay unfertilized eggs that are fed to the larvae and queen.

There are 22 species of harvester ants in the U.S. Most are found in warmer and dryer regions of the West and South, but one eastern species (P. badius) is found in Florida. They normally are found in fields or lawns, where they clear large areas of vegetation around their soil nest openings and gather seeds they store in their burrows. Because they mostly collect seeds, they rarely invade structures. Their severe stings and aggressive behavior, however, can make them pests when they occur in lawns, parks or athletic fields. People with allergic reactions to insect stings should steer clear of these ants and their nests. They have even been known to kill animals that disturb their nests.

Harvester ant mounds are moderate to large in size, depending on the species. Typically, large areas surrounding the mound are stripped of vegetation to prevent shading, as the ants usually remain within the nest during the hottest part of the day. This is the ideal time to administer control measures with an appropriately labeled product.

Their typical foraging range is about 300 feet from the nest, but can be more depending on the species. They exhibit two foraging patterns:

Some harvester ants may occasionally move their nest in response to changes in climate. Nests can be up to 3 feet deep, ranging from one to multiple entrances. Mound surfaces are sometimes covered with small pebbles, charcoal, or fragments of dead vegetation.
There is a single queen in each colony that is relatively long-lived. For example, Florida harvester ant queens have been recorded to live 17 years. Queens of the Idaho harvester ant (P. salinus) average 17 years, but have lived for up to 30 years.

Swarming typically takes place during the summer, especially in the afternoon after a rain event. In regard to the Florida harvester ant, the female swarmers gather on the surface of their nest, where they mate with males that fly in from surrounding nests. Once mated, they fly off to start a new colony. Established colonies can be comprised of 10,000 ants on average.

Fire ants and Argentine ants have been known to take over harvester ant colonies in some cases, and the species is a preferred food for many lizards, birds and other animals. They also often have “house guests” in their nests. For example, in an article for the Entomological Society of America’s online publication, EntomologyToday.org, research entomologist Derek Uhey calls harvester ant nests “biodiversity hotspots” because mites, silverfish, beetles, springtails and the like can be found living in the nests and also will “scavenge from harvester ant ‘trash dumps,’ where ants pile their refuse; these often contain discarded seeds and are nutrient-rich environments.”