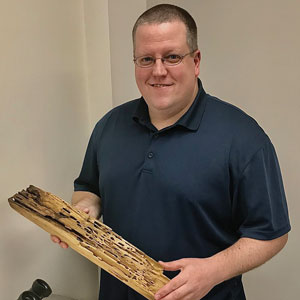 According to a new study released this spring, the severity of carpenter ant activity in Central New York State is tied directly to annual rainfall and not average temperature.

Andrew Sanefski is founder and president of Perimetek Pest Management Corp., based in East Syracuse, N.Y. He also is the lead researcher for his firm’s Urban Entomology Lab. Sanefski and his team based their research on four years of collected data on the frequency and severity of ant activity within homes across Onondaga, Madison and Oswego counties. The project focused on the black carpenter ant (Camponotus pennsylvanicus) because it is the most destructive ant species in the region. Per Truman’s Scientific Guide to Pest Management Operations, Seventh Edition, “carpenter ants do not use wood for food. They cut galleries with the wood grain and prefer to follow softer areas of the wood. The galleries are generally smooth and clean — hence the ‘carpenter’ moniker for these ants… (They) are of economic importance because of the damage they do to structures, the food they contaminate, and their unsightly and unwanted movement inside and outside of buildings.”

The next phase of the research project, he says, is to determine why this link exists, and to develop a way to predict the level of black carpenter ant activity from year to year.