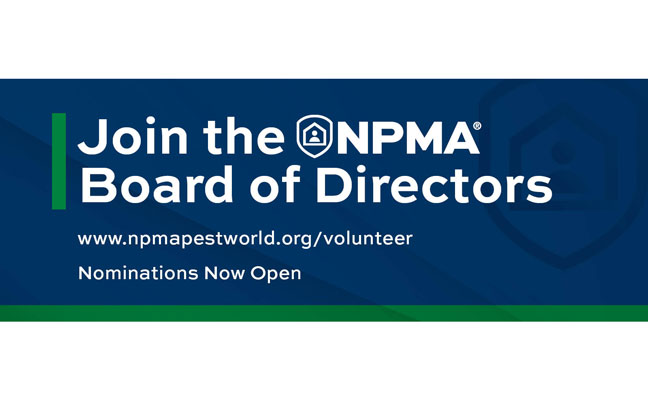 The National Pest Management Association (NPMA) open its annual call for nominations for the 2023-2024 board of directors.

The NPMA is “committed to encouraging its membership to embrace diversity and inclusion as an integral part of nurturing winning workplace cultures throughout the industry,” according to the news release. As part of this commitment, NPMA is encouraging diverse representation on the board of directors and volunteer committees to ensure a broad range of voices are part of the organization’s strategic leadership and decision-making process.

In addition to the current call for nominations for the NPMA Board, including both self-nominations and referrals from colleagues, the association is currently accepting applications of interest to serve on its various volunteer committees in the 2023-2024 term.

Full details on serving as a member of the NPMA Board of Directors, participating in NPMA committees, as well as complete rosters of all newly-appointed 2022-2023 volunteers can be found at on the NPMA website.

Nominations for the board close Aug. 31, 2022. Individuals may submit their interest to participate in an NPMA committee through March 31, 2023.

About the National Pest Management Association

The National Pest Management Association (NPMA), a non-profit organization with nearly 5,000 members from around the world, was established in 1933 to support the pest management industry’s commitment to the protection of public health, food and property.

The driving force behind the establishment of the association was Pest Management Professional (PMP) Hall of Famer Bill Buetter (Class of 1998). Per his profile, he was instrumental in the early days of the Society of Exterminators and Fumigators in New York City, and his marketing skills and tireless energy were soon in great demand. In 1933, he traveled throughout the Eastern United States to rally support for a national organization.

Buettner worked with several other industry movers and shakers to establish the [National Association of Exterminators and Fumigators (NAEF, which is known today as the NPMA)]. They held their first meeting in Washington in 1933. Fifty people were in attendance. By the following year, with the conference held in St. Louis, Mo., there were 125 attendees.