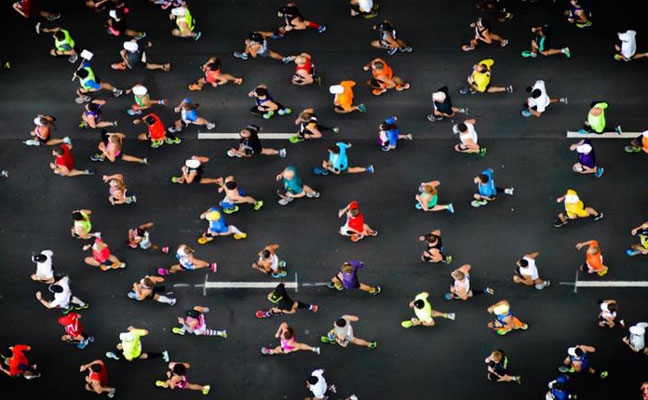 One of my most memorable moments occurred in the New York City Marathon. Halfway through the race, the course takes you over the 59th Street Bridge from Queens into Manhattan.

As I hit the middle of the bridge, a strange silence surrounded me. I heard the rhythmic thumping of the runners’ footsteps echoing around me, a peaceful moment to assess how I was feeling physically and to mentally prepare myself for the challenges ahead.

As I descended off the bridge, I heard the first, faint sounds of the magic that awaited me. I turned onto First Avenue. It hit me like a freight train. Loud music blared from every angle, but even that was overshadowed by the cheers, screams, claps and cowbells of thousands of people.

The energy was incredible. The crowd had been out there for hours, thousands of people, cheering everyone on. Yet it felt as if they were there just there for me. Some even read the “Michael” scrawled on my bib and cheered me on by name.

The enthusiasm flowed through me. It jolted me forward with a new burst of energy and confidence.

It is amazing how motivating a little cheering and praise can be. And not just in a big race, but for average day to day tasks.

When I first began working summers, we were a really small family business. My dad was the main technician, with just a couple of techs. My mother handled everything in the office, and I helped out wherever I could.

One day I was sitting in the office when Dad called Mom, asking who the last tech was to service a particular account. Mom flipped through her Rolodex, then she nervously looked at me. “Michael,” she told him. Her look of concern quickly faded. She smiled. She hung up and told me that my dad just serviced an account and couldn’t believe what a great job was done. Everything was done perfectly. When I met with Dad later on, he couldn’t stop praising me on how good I did at that job. He said this was the first time he could tell someone handled the job exactly how he would have.

I could not have been more proud. Even to this day, with any task I take on, I have that moment in mind, and I approach it with all my abilities to make sure I make my dad proud.

Praise is a great way to motivate. In fact, not offering cheers and praise can push people away from us.

I recently interviewed a technician with years of experience in the industry. It was clear how competent he was and all that he was capable of achieving. So why was he looking to leave a company he worked at for years?

His answer surprised me. He didn’t feel appreciated at his current company. Even though he was one of their top technicians handling their biggest clients, not once did they offer him a raise. But it wasn’t just monetary. He was really hurt that they never patted him on the back to tell him how important he was for the company.

A little cheer and praise can go very far! Don’t be afraid to show it. Break out those cowbells and let everyone around you know how important they are.

Run Your Business: Getting lost