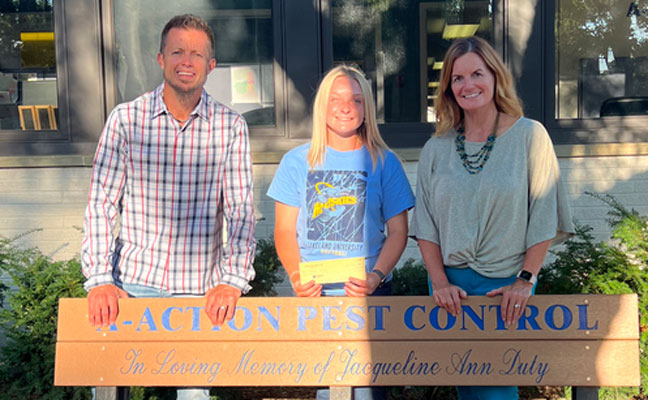 After her graduation from Shoreland Lutheran High School in Somers, Wis., Dodd will be attending Lakeland University in Plymouth, Wis., to major in sports management and leadership with a minor in business. She will also play softball for Lakeland University.

Dodd has been highly involved in her community through volunteer opportunities, extracurriculars and athletics all while maintaining an impressive GPA, according to a news release.

The $1,000 scholarship is awarded annually in memory of Jacqueline Duty, wife of Douglas Duty, founder of A-Action Pest Control. It is intended to encourage entrepreneurship and small business ownership, as these are core principles on which A-Action Pest Control was founded on and are important to the overall local community.

“We are proud to have found such a deserving candidate for the fourth year of the A-Action Pest Control Scholarship Fund in memory of Jacqueline Duty. The team at A-Action is honored to support Ms. Haylee in the pursuit of her education and wishes her the best in her educational and athletic endeavors at Lakeland University,” according to the news release.

A-Action Pest Control was built on the foundation of the love and support of family. In 1988, Douglas M. Duty started the business, his wife Jacqueline cheering him on from the sidelines. When their daughter Cheri took over as owner 19 years later, her mother continued to be an unwavering source of support, carrying business cards with her and “talking up” the family business whenever she had the chance.

In 2014, Cheri and her husband Adam purchased a building in Antioch that would become home to A-Action. At the same time, Jacqueline had been diagnosed with cancer. As a final act of support for her family and their business, she surprised them with the gift of an engraved “A-Action Pest Control” bench to welcome visitors outside of the office and commemorate the success of the business. After she passed away in 2015, Adam had it engraved again in remembrance of Cheri’s mother, Douglas’ wife, and the pillar of their family. It stands outside the A-Action office today as a symbol of that support that has made the business what it is today.