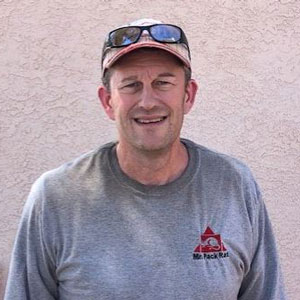 Mr. Pack Rat, an independent division of Truly Nolen Pest Control, announced the promotion of Eric Bell to general manager. He will remain based out of the company’s Tucson, Ariz., office.

Bell joined Mr. Pack Rat in May 2018 working with the trailer crew removing pack rat nests. He was subsequently trained on performing inspections and exclusions. Prior to joining Mr. Pack Rat, Bell resided in Seattle, Wash., for 34 years and spent his last 20 of those years working in the pharmaceutical and biotech industries.

He earned a bachelor of science in zoology with an emphasis in herpetology from Washington State University.

Some of Bell’s new responsibilities will include helping Mr. Pack Rat continue to maintain visibility with the local Tucson community as well as managing his team and helping them reach their full potential.

“Mr. Pack Rat is still the best job I have ever had,” Bell said in a news release. “Each day I get to do different things, and I really enjoy working with our customers while educating them about pack rats and pack rat behavior. I work with a great group of dedicated employees and they make my job easier.”

“Eric is an outstanding representative of Mr. Pack Rat,” said Thayer Thacker, Truly Nolen Western region trainer, and someone who worked with Bell directly when Mr. Pack Rat became an independent division of Truly Nolen. “I know he will continue to have success in his new role and I look forward to seeing where he takes the company.”

Founded in 2006, Mr. Pack Rat is a one-of-a-kind service company based in Tucson, Ariz. It is devoted exclusively to resolving pack rat issues with safe, humane and effective methods. As a local leader of pack rat (Neotoma spp.) elimination and prevention, every year the company live traps over 5,000 pack rats, removes thousands of rat nests and rat-proofs hundreds of homes, spas, grills, air conditioners, pool heaters, garages and more. The company became an independent division of Truly Nolen in 2021.