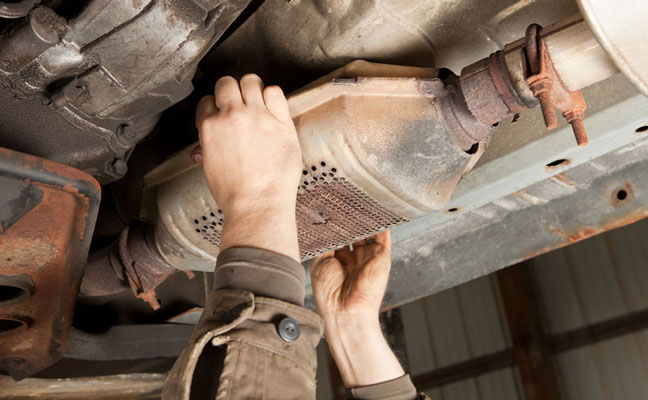 It doesn’t take long for someone to slide under a car and leave with a catalytic converter for the precious metals inside.

Catalytic converter thefts continue to rise all throughout the United States, according to an article from WPTV in West Palm Beach, Fla.

Thieves cut the converters out of the car’s exhaust systems, then sell them to scrappers. They are then resold to recycling companies.

The thieves get about $50, but the metals inside include rhodium, which is the rarest metal on Earth. Even though there is only a gram or two of rhodium inside, about an ounce of the metal can be worth about $15,000.

Rhodium is used in converters with palladium and platinum to reduce exhaust gases, but as the rarest metal in the world, it’s also valued for jewelry, high-end mirrors and electrical devices.

Recently, two men stole 13 catalytic converters, according to WPTV. Eight of them were from work trucks of a local pest control company.

They were aftermarket catalytic converters that were cut off of the vehicles, according to the detective on the case.

According to a 2021 Bloomberg report, State Farm Insurance paid $62 million in claims for around 32,000 converter thefts. That’s up more than 1,100 percent from just two years earlier.

How to protect your fleet

Have you had experience with this situation? Tell us about it at pmpeditor@northcoastmedia.net.