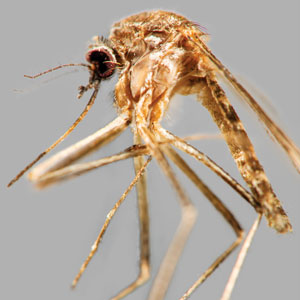 This species routinely shows up as one of the most commonly encountered at accounts, according to Pest Management Professional’s exclusive annual mosquito surveys, which most recently appeared in the April 2022 issue. The western encephalitis mosquito is widely distributed west of the Mississippi River, but occasionally appears in eastern states. It is most commonly found in California.

This species can be found in almost every environment, its spread being the result of human activity. For example, the website AnimalDiversity.org says irrigation efforts make “formerly inhospitable arid regions available for breeding, which can occur in any sunlit standing freshwater. The species has been found at elevations ranging from sea level to over 3,000 meters.”

Adult mosquitoes are medium-sized and dark, with a broad white band around the middle of the proboscis (beak) and white band at each end of the tarsi (hind leg segments). White longitudinal stripes extend along the middle and hind legs, and dark chevron patterns appear along the underside of its abdominal segments.

On average, 190 eggs are deposited at a time into a “raft” atop the water, which hatches within two days. Females tend to lay eggs in newly flooded areas so there is enough nutrition for the larvae — but will make do with just about anything that contains water, including canals, ditches, ground pools, hoofprints, effluent (waste) from cesspools, cans, barrels, catch basins, ornamental ponds and more.

Breeding takes place continuously during warm weather. In winter, AnimalDiversity.org notes, “females carry inseminated nullipars (undeveloped eggs), which require a bloodmeal to mature in the spring. However, in a phenomenon termed autogeny, some females are able to mature their initial egg batch without a bloodmeal, and oviposit four to five days after emergence.”

Developmental periods range from seven to 28 days, depending on temperature and food availability. Larval and pupal stages develop rapidly in the water, and emerge as adults into the air. Adults usually are found within one mile of the hatching site.

These mosquitoes are most active after sunset, feeding mostly on birds in the spring. As birds learn to avoid them, however, they move on to rabbits, horses, cattle and humans. In the daytime, they often are found resting in shady areas such as tree holes and animal burrows.
An integrated approach works best for managing populations of C. tarsalis. This includes removing possible habitats (standing water in rain gutters, kiddie pools, birdbaths, etc.); adding/repairing barriers like window and door screens; and using an appropriate larvicide and adulticide.