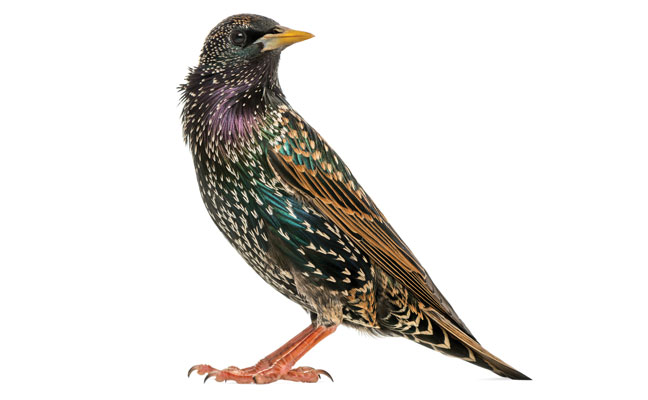 Starlings were brought into the United States from Europe. An individual who wanted to introduce into America all of the birds mentioned in William Shakespeare’s works released starlings in New York City in 1890s. Today, they are found throughout the entire United States, including Alaska and Hawaii.

Normally, starlings spend the warm weather months in rural areas. When it becomes cold in the fall, thousands of birds often descend in large flocks into towns and cities at night to seek the warmth and shelter of large buildings, or to roost in trees in residential areas and in city parks. They also use commercial structures, such as lighted signs, marquees and billboards.

The vocalizations of starlings made at the roost sites — and the filth they produce — are extremely annoying to nearby residents and building owners. When large numbers of starlings harbor in trees, the accumulation of their feces on and around the trees can kill the trees unless the starlings are evicted.

The starling is a stocky, short-tailed bird about the size of the robin. From a distance, it appears entirely black, but it is actually flecked with light speckles. Most of its feathers show iridescent purples and greens. The bill of both sexes is yellow during breeding season, which is January to May, and dark for the rest of the year. Juveniles are a plain brownish-gray. Some people confuse starlings with blackbirds, but blackbirds do not have the short tail or yellow bill.

Starlings mate in the spring. They situate their nests in areas such as tree cavities, birdhouses, and in almost any available holes, nooks and crannies in and around buildings. Females lay four to seven eggs that hatch after about 12 days of incubation. The young leave the nest when they are about 21 days old. Both parents help build the nest, incubate the eggs and feed the young. Usually two broods hatch per season.

Although the starling is not as prolific a breeder as the sparrow, they are extremely hardy and able to survive difficult conditions and severe winters. This results in a lower natural mortality rate and is partly responsible for the hundreds of thousands of birds that form their flocks.

During the breeding season in the spring, starling flocks may be segregated into groups of mated birds caring for their young, and groups of young “bachelor” birds from the first brood. As the summer progresses, parent birds and the young from the spring broods merge, increasing flock size. By fall, flocks may be extremely large.

Portions of these flocks will migrate in the fall up to several hundred miles, while others remain in the same general area throughout the year. During the winter, starlings feed and roost together in their flocks. They prefer to roost in dense vegetation such as groups of closely planted pine trees, or they use city buildings and parks that offer protection from wind and adverse weather.

During the daylight hours, winter urban starling flocks feed in the country at feedlots or grain elevators and fly back to the protected city roost sites at night. Each day, they may fly 15 to 30 miles between roost sites and feeding sites.

Starlings consume a variety of foods. Insects and other invertebrates make up a large portion of their diet during the breeding season. Other diet items include fruits, seeds and scraps of food found on the street and in garbage. During the winter months, livestock rations or food refuge from food-processing facilities make up a substantial part of their diet. In times of food scarcity, starlings will feed on almost anything to survive.