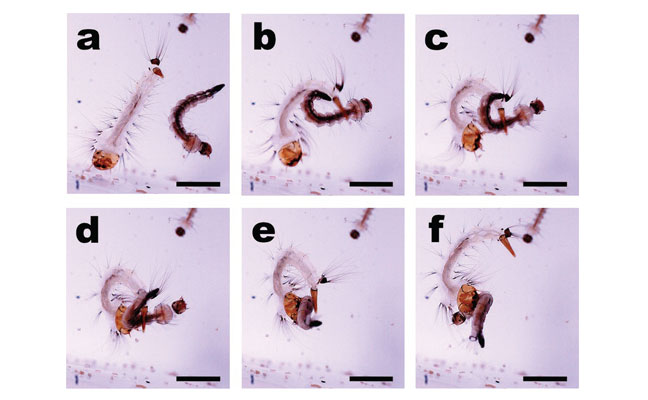 For the first time, scientists have detailed how predatory mosquito larvae attack and capture prey in aquatic habitats with striking high-speed video footage.

Published in the Annals of the Entomological Society of America, this new research sheds light on behavior that has long proven too small and too fast to study, until now.

Before taking flight, mosquitoes spend their youth in water, anywhere from flood plains to flowerpots. While most mosquito larvae eat algae, bacteria, and other microorganisms, some are predators that feed on other aquatic insects, including other mosquito larvae.

These predatory species have been a source of fascination for Dr. Robert G. Hancock, professor of biology at Metropolitan State University of Denver, for much of his career, he says. He first observed their strikes under a microscope in a medical entomology class as an undergraduate.

“It was so incredibly fast,” Dr. Hancock said in the news release. “The only thing that we saw was a blur of action.”

But in the years since, advances in video and microscope technology have enabled Dr. Hancock and his students to slow that action down and gain a view into a world that no one had ever seen before.

Dr. Hancock’s report in Annals of the ESA shares 10 videos of mosquito larvae strikes and analyzes the anatomical detail and sequence of motions involved. Five of the videos show the similar method employed by two species, Toxorhynchites amboinensis and Psorophora ciliata, that are obligate predators — their diet requires eating other insect larvae — and whose biology and behavior are highly adapted for capturing prey. The other five videos feature Sabethes cyaneus, a species that both feeds on microorganisms and sometimes preys on other larvae (a facultative predator) and which has evolved a significantly different predation technique.

In both Toxorhynchites and Psorophora species,the larva strikes prey with a sudden neck extension to launch its head away from its body and toward the prey. Simultaneously, its mandibles and several whisker-like brushes spread open and then snap closed on the prey upon impact. The unique, harpoon-like head-propulsion action appears to be generated by the larva first building pressure within its abdominal segments and then rapidly releasing it, the researchers say.

Sabethes mosquito larvae lack the head-extension mechanism. Instead, a Sabethes larva snares prey by using its tail to sweep the prey toward its head. Meanwhile, the larva opens its mandibles and maxillae (pincer-like mouthparts) and clamps onto the prey as it is brought in. Use of the tail — called a “siphon” because it serves as a breathing tube for mosquito larvae as they hang upside down at the water’s surface — was also a surprise, Dr. Hancock said .

Both strike styles, in all three species in the study, take about 15 milliseconds. That speed indicates a highly developed, almost reflexive behavior called a fixed-action pattern, Dr. Hancock said. He likened it to the action of a swallow, which involves multiple, small individual muscle actions. “All of this stuff has to work in concert—we all do it so automatically,” he says. “And that’s exactly what these mosquito larvae strikes have to be. It’s a package deal.”

The footage of Toxorhynchites and Psorophora strikes were first captured on 16-millimeter film with a microscope and camera setup designed — through much trial, error, and wasted film, Dr. Hancock said — during his time at the University of the Cumberlands in the 1990s. He returned to the effort in 2020 with students at MSU Denver, this time with a digital high-speed camera in a similar setup, to film Sabethes strikes. The lights needed to illuminate the mosquito larvae under the microscope are so hot and bright that they require heat-protective filters “to not just cook” the larvae, and “the darkest sunglasses I could buy” to protect the researchers’ eyes, Dr. Hancock said. Nonetheless, the new digital camera technology enables much easier and more advanced research on mosquito larvae. While the high-speed film camera captured footage at up to 600 frames per second, the new digital camera can surpass 4,000 frames per second. And a 32-gigabyte SD card can store, by Hancock’s estimate, the equivalent of about $12,000 worth of film and development.

Dr. Hancock has studied mosquitoes for most of his career, and he uses them regularly as model organisms for research conducted by the students he teaches. He says this new knowledge of how predatory mosquito larvae capture prey can be a tool for “continuing to unveil mysteries of nature around us, especially in anything that’s aquatic,” and that the videos might open people’s eyes to the ecosystems living in even the smallest pools of water. “Small containers of water that don’t move are primarily the domain of mosquitoes,” he said in the release.