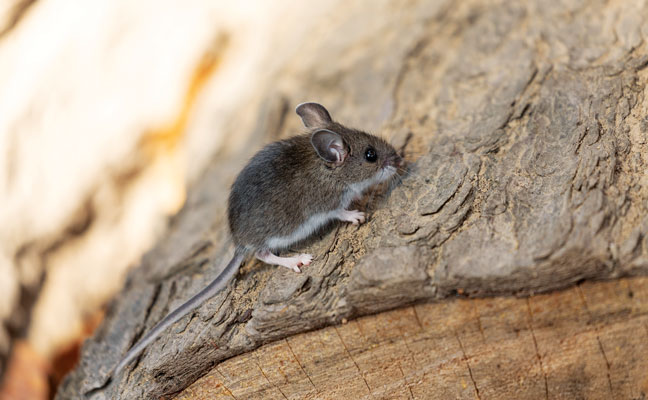 The deer mouse is actually the most common and widely distributed mouse in the United States, although it is absent from most of the Gulf states and large sections of the eastern coastal states.

Deer mice are nearly indistinguishable in appearance and habits from white-footed mice (Peromyscus leucopus), but they are separate species. Both average about 6 inches long, including a 2.5-inch tail. Their bodies are reddish-brown with white chests, white feet and a bi-colored tail, which is lined with brown fur on top and white fur on bottom.

These mice do not typically occur in inner-city areas. Their natural habitat is rural and semi-rural areas, where they inhabit fields, wooded lots and various types of vegetation found around homes and outbuildings. As a result of urban sprawl into undeveloped areas, these mice are more frequently entering houses, garages, storage sheds and stored campers during the colder months. In unoccupied summer homes or cottages, damage to upholstered furniture can be extensive.

Peromyscus mice breed during the spring and fall, although under favorable conditions, litters will be produced at other times of the year as well. Most litters average about four pups, and the female produces between two and four litters per year. If not eaten by a predator, a deer mouse can live up to two years in the wild. It is active all year, and stores food for the winter season much as the tree squirrels do. Nuts, seeds, berries and insects are their usual food.

The nests of these mice generally are located underground in cavities about the roots of trees or shrubs, beneath a log or board, or in a tunnel built either by another animal or by the mouse itself. Above-ground nests are established in hollow trees, building voids and spaces, unused equipment, cabinet voids, log piles, unused furniture, fence posts, old bird and squirrel nests, and along the sill plate in basements and crawlspaces.

In occupied houses, Peromyscus mice can be managed with snap traps or multiple-catch traps. Traps and/or appropriately labeled baits should be placed as close to the suspected mouse activity as possible. Locations of multiple droppings often are indicative of high-activity areas. Keep in mind that these mice often collect, carry and hoard their food, so it is wise to secure bait with nails or wire, and use tamper-resistant bait stations where possible.

The risk of hantavirus pulmonary syndrome

Following the original outbreak in the southwestern U.S. in 1993, there was a heightened national awareness of hantavirus pulmonary syndrome (HPS). The number of additional cases since then, however, indicates that HPS is rare. The Centers for Disease Control and Prevention (CDC) reports that between 1993 and 2020, 833 cases of HPS and non-pulmonary hantavirus infection — also linked to deer mice and white-footed mice — were reported in the United States. Of these, 94 percent of cases occurred west of the Mississippi River, and 35 percent of all cases resulted in death. While the risk is low, the possibility does exist; it’s worth educating technicians on taking the proper precautions when dealing with rodent accounts, such as wetting down droppings before cleanup and wearing appropriate personal protective equipment (PPE).

The CDC maintains an online clearinghouse for the latest news and information about HPS, including a comparison between HPS and COVID-19 symptoms, at CDC.gov/hantavirus/index.html.