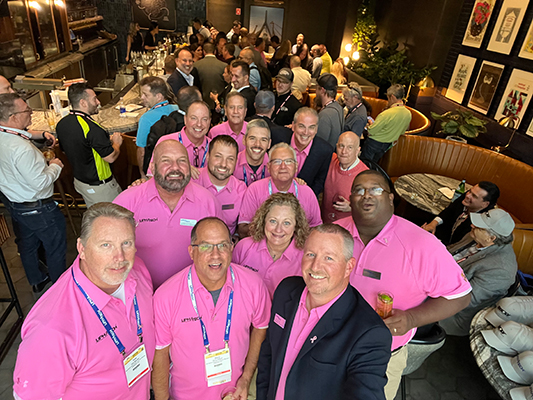 Last month, during the National Pest Management Association’s (NPMA’s) PestWorld 2022 event in Boston, Mass., team members of Liphatech Inc.’s structural pest control division showed support for one of their own affected by breast cancer. They donned custom pink shirts to raise awareness and donations for the disease at an event Liphatech hosted at Earls Prudential restaurant.

As a result of the event, a donation of $1,300 was made in honor of the Liphatech team member fighting breast cancer to Circle Camps, a free summer camp and leadership program for girls who have experienced the death of a parent.

With U.S. headquarters based in Milwaukee, Wis., Liphatech is a worldwide manufacturer of pest control products. It is considered to be the developer of three of the industry’s active ingredients: chlorophacinone, bromadiolone and difethialone. The company was founded in France in 1946 io develop anticoagulants for the treatment of heart patients. It developed chlorophacinone in the 1960s and branded it as Rozol, a family of products that includes grain and pelleted products for field and structural use, and a tracking powder for use in and around structures. In the 1970s, Liphatech developed bromadiolone, its original second-generation rodenticide active ingredient.

The innovations continued with the opening of its U.S. facility in 1987. Research there and in Europe resulted in the discovery of difethialone during the late 1980s, with U.S. Environmental Protection Agency registration as an active ingredient in 1995. Its most recent innovation is the development of soft bait rodenticides.