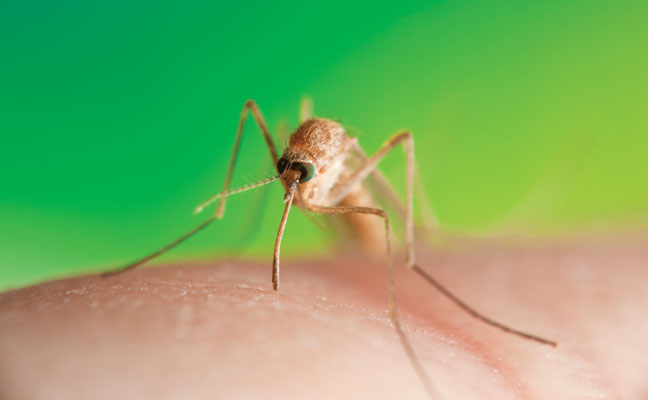 Also known as the tomguito and the upland floodwater mosquito, this species is thought to be the most widespread member of Aedes in the U.S. It is a major pest in the northern states (vexan is Latin for “bother”), and it is present to a lesser extent in the South. Adults are medium-sized, with narrow bands of white scales on the hind tarsi. There is a V-shaped notch at the middle of each band of white scales on the back of the abdomen.

Adults may migrate long distances from their hatching site; a distance of five to 10 miles is common. Females are vicious biters, especially during the day, and are attracted to light. These mosquitoes also will take sugary liquids like nectar, honeydew and sap.

This species breeds in rain pools, floodwater, roadside puddles, hog wallows and practically any other temporary body of fresh water. Eggs are laid on the ground and hatch when flooding occurs.

Depending on the temperature, the larval and pupal stages may require seven to 34 days. The larval season is typically April to September, while adults typically live from May to October.

Inland floodwater mosquitoes are known vectors of Dirofilaria immitis (dog heartworm), myxomatosis (a deadly rabbit viral disease), and Tahyna virus, a seldom-diagnosed Bunyaviridae virus that affects humans in Europe, causing a fever that disappears after two days, but can lead to encephalitis or meningitis.

In at least one study, A. vexans exhibited significantly higher transmission rates of Zika virus than A. aegypti. According to the online Encyclopedia of Life, hosted by the Smithsonian National Museum of Natural History, “wide geographic distribution, periodic extreme abundance, and aggressive human biting behavior increase its potential to serve as a Zika virus vector” in northern climates where A. aegytpi and A. albopictus — the yellow fever mosquito and Asian tiger mosquito, respectively — are less abundant.