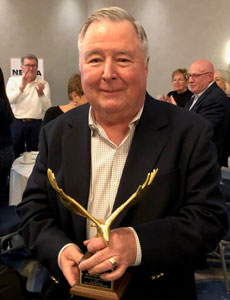 According to the news release, DeJesus’ “bubbly upbeat personality, along with his wealth of pest control knowledge, left quite a mark on the business, the industry and his community.”

He started as a service specialist in 1977 and worked his way up through the company. In the 1990s, he was at the forefront of promoting the concept of integrated pest management (IPM), speaking on the topic throughout the country. At the same time, DeJesus began hosting his award-winning radio show, answering pest questions from listeners throughout Southern New England.

“We never knew if Tony was a Broadcaster or a Bug Guy. He was just so good at both!” said Stephan Goldman, owner of Big Blue Bug Solutions. “His impact on the community was enormous. Not only through the radio show but also through his charitable endeavors.”

In December 1992, DeJesus happened to have a few extra Christmas gifts around the holidays. With his father’s long-term commitment to the military, he thought it might be nice to drop these gifts off at the Rhode Island Veterans Home. The veterans were blown away by his generosity. After seeing the response to these surprise gifts, Tony knew this would become an annual tradition.

Along with help from Big Blue Bug Solutions, he began Operation ROVAC (Remember Our Veterans At Christmas). Each year, DeJesus and his colleagues deliver gifts to the Veterans Home. It began as small amounts, but over the years, it has grown substantially. Now, with contributions from Big Blue Bug customers and organizations throughout the area, the company brings the gifts by the truckload every December. It has become the largest donation to the Rhode Island Veterans Home throughout the year.

Fittingly, DeJesus also plays Santa Claus throughout the community, including a very special annual event with the children of Big Blue Bug employees.

“He is the reason why hundreds of children believe in Santa Claus,” said Brian Goldman, CEO of Big Blue Bug Solutions. “He knows each child’s name and some of their recent events, like recitals or soccer games. His warm and caring nature truly makes Christmas come to life. Tony provides a magical touch that only he is capable of creating.”

In 202, DeJesus’ contributions to the community and the industry were recently recognized by the New England Pest Management Association (NEPMA) presenting him with the Bart Eldredge Award. It is NEPMA’s highest honor recognizing an individual who has made a long-term commitment to the betterment of the pest control industry in New England.