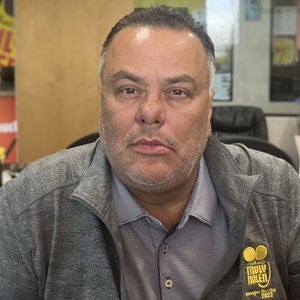 Rodriguez joined the company in August 2021 and was most recently a manager-in-training. Prior to joining Truly Nolen, he worked in grocery retail industry for 36 years with his most recent position being director of manager development for Sprouts/Sunflower Farmers Markets. He earned an associate degree in business from Pima Community College and played three seasons for their baseball team.

Rodriguez is also heavily involved in his local community as he is currently a member and has served on the board for the Tucson Centurions, an organization that raises money for local youth charities, such as Big Brothers/Big Sisters, Parent Aid, Youth on Their Own and numerous others, over the past 14 years.

Some of Rodriguez’s new responsibilities will include helping the service office continue to maintain visibility with the local North Tucson community as well as instilling the company’s core values throughout his team.

“New challenges are what get me going, and I am ready to help continue building a cohesive team that strives for success,” Rodriguez said in the news release. “My favorite thing about working for Truly Nolen is the people and the various industries a majority of us came from.”

“Rich’s extensive experience and success in the retail grocery industry, passion for helping others, and attention to detail made him an easy choice for his new position,” said Desi Rodriguez, Truly Nolen’s Southern Arizona district manager. “I am glad he is part of our team and I look forward to seeing him help our North Tucson team members achieve their goals in the future.”