Ant control: Getting it right the first time

There are more than 16,000 identified species and sub-species of ants worldwide, roughly 700 of which can be found in the United States.

Yet only a few dozen of these species are considered pests. Why? While ants may benefit the environment by aerating and redistributing nutrients in soil, for example, they can also damage crops, create structural damage to buildings, and bite and sting people and animals. In fact, ants are the No. 1 household and nuisance pest in the United States — and the highest revenue-generating pest for pest management professionals (PMPs).

Although small, their vast numbers, complex colony structures, and sociable behaviors make them difficult to control. It’s no surprise, then, that ants represent a high percentage of PMP callbacks and are one of the top pests for which PMPs would like to learn better strategies for control.

There are several key areas to focus your attention on, to better gain and maintain control of ants and limit customer callbacks.

In general, ants have noticeable waists, one or two nodes, clubbed (bent) antennae and longer legs (compared to a termite). Some species will have a stinger. When wings are present, the front wings will be longer than the back wings. Although generally similar, each ant species will vary in these characteristics. Proper identification is important because it will help with understanding the species’ colony structure and unique behaviors.

Once properly identified, it’s important to note colony structure, or which social form the species belongs to. There are two primary social forms.

In monogyne, or single-queen species, reproduction is accomplished by a single dominant queen. These ants are often larger in size and will vary in color and behavior. They typically occupy a single discrete nest, such as the large dome-shaped mounds built by fire ants.

Polygyne, also referred to as multi-queen species, have at least two reproductively active queens within a colony. Some colonies, like those of Argentine and odorous house ants, have hundreds or thousands of queens spread out over many interconnected satellite colonies.

Note: Fire ants have both single- and multi-queen social forms.

Even though all ants are social, their behaviors can vary drastically by species. Nearly all ants use a complex suite of chemicals, called pheromones, to communicate with nestmates. They use pheromones to mark newly explored territory, to recruit nestmates to food, as a distress signal when they are in trouble, and to distinguish queens from workers. Additionally, many “farm” honeydew-producing insects such as aphids and scales. These insects are provided predator protection by ants in exchange for their sugary secretions. 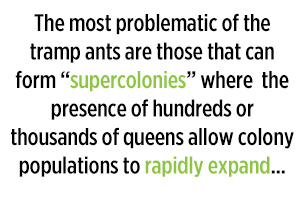 Polygyne, or multi-queen species, are often lumped into a group called “tramp ants.” These ants are easily transported globally through trade and commerce in containers, soil, plants and timber, and on machinery. They are aggressive and competitive, dominating food resources and available nesting sites. They have broad diets, can nest virtually anywhere, breed rapidly, and attain massive colonies that further help them exploit non-native environments.

The most problematic of the tramp ants are those that can form “supercolonies,” where the presence of hundreds or thousands of queens allow colony populations to rapidly expand and dominate an environment by outcompeting native ants for resources.

Where will you find ants on your next call? 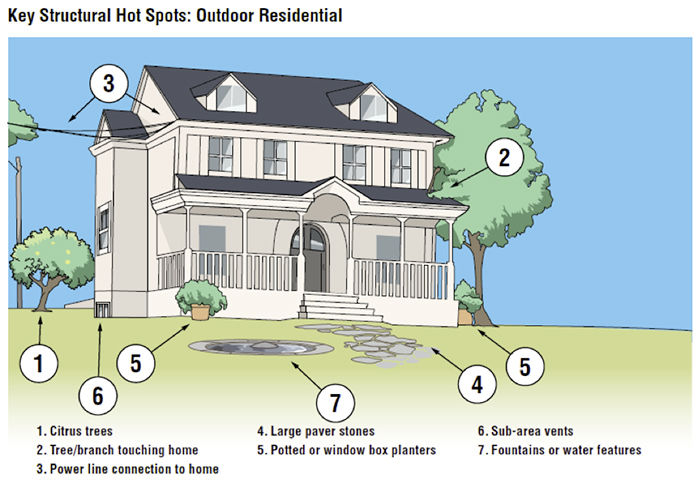 Indoors, nests will be found near sources of moisture, such as voids near kitchen and bathroom sinks, around bathtubs and potted plants. Some species can also nest in crawlspace voids between insulation and the subfloor, and between floor joists, usually under moisture sources noted below. 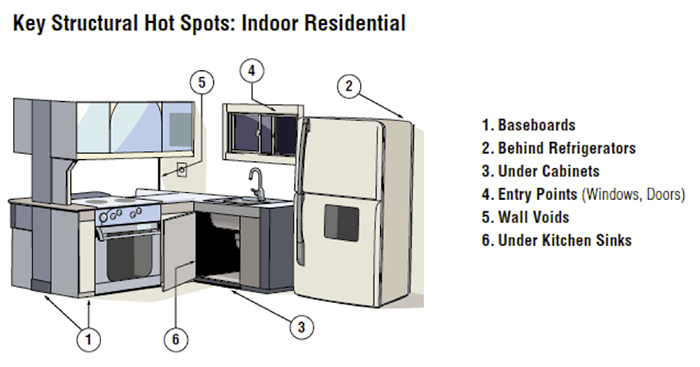 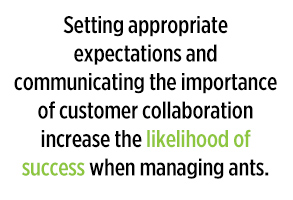 Setting appropriate expectations and communicating the importance of customer collaboration increase the likelihood of success when managing ants. Be sure to communicate what to expect before and after the treatment, as well as any conducive conditions that require remediation. Best results are seen when the technician and the customer work together. Here are a few key things to communicate to customers: 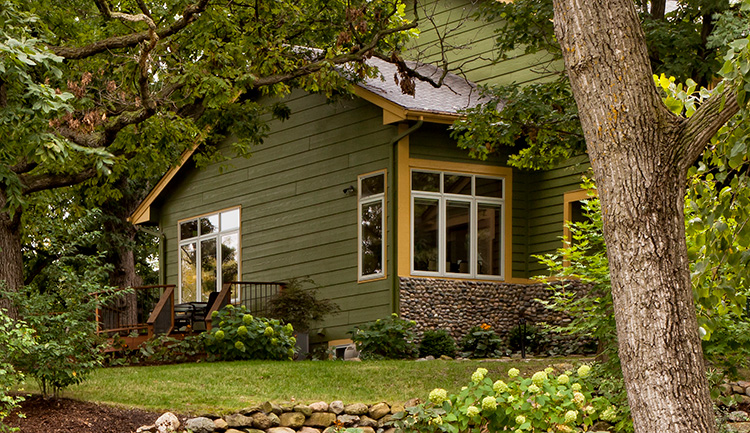 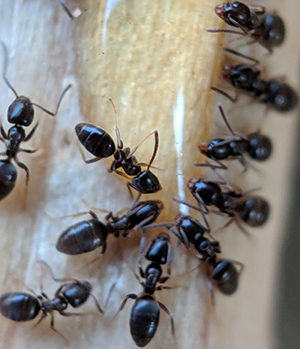 Use the inspection results to determine the right treatment plan. Treatment should be based on species and nest location. Remember that polygyne species often have multiple nest locations around a structure.

Individual ants are easy to kill, but ant populations are difficult to control. Be sure to look for the following features in ant control solutions. 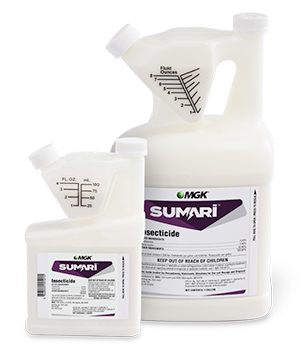 A tradition of innovation

MGK has been helping PMPs control pests for nearly a century, and continues to bring industry innovations to the forefront.

The company is proud to introduce Sumari® Insecticide to the market. All-new Sumari boosts productivity and simply gives you more control to get it right the first time.

“Make ant control simple,” you said. So we did: Deadly simple.

Visit MGK.com/Sumari to learn more about this revolutionary new product, and visit MGK.com/Ants to view ant control resources such as protocols, tips and tricks, and more!