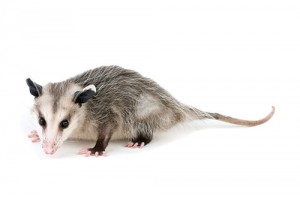 Opossum. Photo courtesy of, and copyrighted by, Gene White, pmimages@earthlink.net

Virginia opossums, Didelphis virginiana (meaning double-wombed), range from the West Coast to the Central and Eastern United States. Habitats are numerous, ranging from areas low in rainfall to moisture abundant, as well as open to densely wooded areas.

Nocturnal, with a running speed of more than 7 mph, the opossum’s home range is as large as 50 acres. Opossums prefer niches near bodies of water or swamps. Mating season is January to July in warmer parts of their range. Death results for most young in the first year. Longevity is about seven years.

Shelter can be within abandoned burrows, tree hollows, brush piles and other debris. Nuisance and damage occurs when opossums move into attics and garages. Near people, opossums often investigate compost piles, garbage cans and pet-food dishes.

With such a resourceful adversary, pest management professionals must know the dos and don’ts that provide solutions.

■ Do interview your client and take notes to gather detailed information regarding opossum sightings and behavior.
■ Don’t overlook any detail provided in Q&A discovery with your client because the smallest detail might be key to a successful intervention.

■ Do conduct a thorough inspection for any evidence of opossum activity. Look for travel tracks, droppings, disturbed areas and disturbed trash containers.
■ Don’t deploy any devices until the structure and property are inspected completely.

■ Do prevent structural entry by excluding any openings, sealing and repairing with the appropriate materials.
■ Don’t overlook any potential structural failures or delayed maintenance issues that could be exploited.

■ Do use appropriate sized box or cage traps (10x12x32 in. is standard) because opossums aren’t trap shy. Deploy the traps along fences and/or visible trails.
■ Don’t use inappropriately sized traps because they are inhumane and ineffective.

■ Do bait the traps with raw eggs, peanut butter on bread, or grapes and bananas.
■ Don’t set traps without any bait motivation.

■ Do euthanize unwanted animals humanely with carbon dioxide gas, or trap and release several miles from the trapping point, depending on local regulations.
■ Don’t fail to contact wildlife authorities.

Opossums can be structural nuisances and can cause property damage, leave defecation and potentially inflict injuries on pets. They’re also potential reservoirs for leptospirosis (Weil’s syndrome) and carry fleas, mites and ticks. Outsmart pestiferous opossums by knowing the dos and don’ts. Avoid the don’ts, and stick to the dos to produce solutions, satisfied customers and recurring revenue.

Dr. Mitchell, D.O., Ph.D., M.P.H., B.C.E., a board-certified physician and entomologist, serves as principal technical specialist for PestWest Environmental. He can be reached at doc.mitchell@pestwest.com or 866-476-7378.