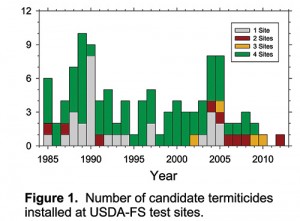 Federal termiticide registration is based in part on field test efficacy data reported to the United States Environmental Protection Agency (EPA). These field tests evaluate termiticides for five years before consideration by EPA. The tests are conducted at four national field sites throughout the U.S., by the Insects, Diseases and Invasive Plants research work unit of the U.S. Department of Agriculture Forest Service (USDA-FS). The USDA-FS has evaluated termiticides for over 75 years as part of its ongoing Termiticide Testing Program. In 2012 the USDA-FS managed and administered six agreements with product manufacturers.

Figure 1 illustrates the number of products installed at the Forest Service test sites since 1985. Product installations have declined markedly in recent years, with only a single new product installed in 2012. As discussed in the 2011 termiticide report (PMP, February 2012), this decline in new products moving into the registration process could result in reduced customer choice in the future.

Only four field agreements were carried into 2012, representing three candidate products. One new product was installed during 2012.

The EPA Product Performance Test Guideline, OPPTS 810.3600 specifies the ground board and concrete slab field tests for evaluating the efficacy of soil-applied termiticides. Each test is replicated 10 times at all test concentrations at each of four sites located in Ariz., Fla., Miss. and S.C.

The ground board test consists of a pine board centered in a 17 by 17-inch plot of exposed treated soil, with a 6 by 6-inch pine board centered on the plot. The concrete slab test consists of a 17 by 17-inch plot of treated soil covered by a 21 by 21-inch concrete slab. A 4-inch pipe extends through the center of the slab and through an underlying polyethylene vapor barrier. The covered pipe contains a pine test block placed on the treated soil.

In both tests, termiticides are applied to the soil at an equivalent pre-construction volume of one gallon per 10 square feet. Data are collected annually on the amount of damage to the wooden blocks and the presence of termites in infested plots.

To be successful for registration according to the federal guideline, termiticides must prevent termites from penetrating treated soil in all test plots (i.e. 100% control) for a period of at least five years using the concrete slab, ground board or stake tests. The greatest weight is placed on data obtained using the concrete slab protocol.

The Florida Rule considers success of a candidate termiticide differently from the federal guideline. For the Florida Rule, termiticides must prevent damage greater than ASTM 9 (equivalent to Gulfport 1) to wooden test blocks in 90% of all plots for five years in one or more of the southeastern test sites with a minimum of 10 concrete slab plots. Every year, all test plots are evaluated regardless of infestation history, and previous infestations do not count against the 90% rating (thus, each year is considered independently).

Results for repellent and non-repellent termiticides are presented in Tables 1 and 2, respectively. Due to the number of study closures over the past few years (see last year’s termiticide report, PMP, Feb. 2012) few termiticides are being actively followed in this year’s report. In fact, there is only one termiticide left for which new data can be reported – Altriset (Chlorantraniliprole). For this compound, no changes in efficacy were noted for the registered rate. However, the 0.025% A.I. rate of chlorantraniliprole in the concrete slab test did reach its final year with the current reading (That’s 7 years of efficacy using the Florida Rule considering all data from the southeastern states).

The state of Fla. does not apply its rule on a site-by-site basis if data exist from multiple southeastern sites. It combines the data from all sites. Combining the data for the three southeastern sites (see Tables), the Florida Rule yielded longer performance periods than did the federal guideline in 91% of the cases and equal durations in 9% of the cases. On average, the product performance duration is about twice as long under the Florida Rule (7.6 years) as the federal guideline (3.5 years) when all active ingredients and rates are considered.

Clearly, fewer products would be registered if the federal efficacy guideline was always taken literally. Since the EPA’s primary mission is to protect human health and the environment, it places greater weight on toxicology and environmental data than it does on efficacy. As a result, it sometimes registers compounds that do not strictly adhere to the guideline.

Personnel changes in the Testing Program

Dr. Chris Peterson, a research entomologist with the Insects, Diseases and Invasive Plants research work unit (which houses the termiticide testing program), has left the USDA Forest Service to pursue other interests. Dr. Peterson is now working with the U.S. Peace Corps in Uganda. Dr. Peterson had worked for the Forest Service for 11 years, and was a contributor to the annual termiticide report for each of those years.

After 28 years with the USDA, Doctor Terry Wagner retired last year. Wagner also served as point of contact between the USDA Forest Service termiticide testing program, the Association of Structural Pest Control Regulatory Office, EPA, NPMA and Responsible Industry for a Sound Environment (RISE) for 13 years. Additionally, he served as project leader for the former Wood Products Insect Research Work Unit, and most recently as team leader for the Wood Products Insect Research Team of the Insects, Diseases and Invasive Plants research work unit. He has written the annual termiticide report for this publication for the past 11 years.

Aside from the departure of Drs. Peterson and Wagner, the remainder of the termiticide testing program will remain intact. Dr. Wagner’s former duties will be taken over by the project leader for Insects, Diseases, and Invasive Plants, Dr. Douglas A. Streett.

The EPA’s Product Performance Test Guidelines (OPPTS 810.3600) provides direction and guidance on approaches to testing termiticides to generate data that may be considered by the EPA for the purpose of satisfying efficacy data requirements for product registration. In March 2013 there will be a 3-day meeting of the Federal Insecticide, Fungicide, and Rodenticide Act Scientific Advisory Panel (FIFRA SAP) to consider, review scientific issues of, and provide comment on the taxa for which the required submission of product performance data is appropriate, general testing considerations and product performance standards. Product performance standards for wood destroying insects (including termites) will be included. An announcement of the FIFRA SAP, including dates and locations for public comment, has been published in the Federal Register (December, 2012).

All registered termiticides in the U.S. have been evaluated by the USDA-FS. Its testing program has provided product performance data to registrants, regulators, the pest management industry and the American public for decades. Once again, the reduced number of candidate products entering the testing program could lead to a reduction of choices in the soil termiticide marketplace in a few short years.

Dr. Wagner is team leader of the USDA-FS’ Wood Products Insect Research Team, Starkville, Miss. Dr. Shelton is a research entomologist and Mr. Fye is a biologist, both with the project.

The future of termite control