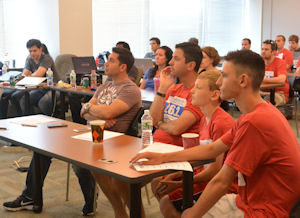 Mike Schwartz of Hometown Heroes (in brown T-shirt) and Marathon CEO Chris Sullens look on as teams of developers present their applications during the 26.2 hour Marathon Hackathon. Each team was judged and scored on the application’s creativity, usefulness and execution.

NEPTUNE, NJ—Marathon Data Systems, which provides a cloud-based business management platform for companies with a mobile workforce, hosted its Second Annual Marathon Hackathon on June 7. Taking place in Marathon’s Neptune, N.J., office, the event included six teams of developers competing against one another to create the best mobile application that would help connect charities and volunteers.

During the opening of the event, leaders of local charities spoke to the developers about the challenges their organizations face in finding new volunteers. Speakers included Ginger Harris from Samaritan House Lakewood, Heather Keefe of Keefe Communications and Mike Schwartz of Hometown Heroes. In addition, a Marathon representative provided insight from the volunteer’s point of view in discussing the time-consuming task of finding volunteer opportunities. Armed with this knowledge, the developers formed teams and began hacking.

“This year’s event was bigger and better than last, and I’m so proud that we have the staff and resources to put on events like this each year,” says Chris Sullens, president and CEO of Marathon Data Systems. “Each of the teams did a fantastic job, and created apps that I truly believe can help solve the issue of matching local charities with those that want to donate their time. Mike Schwartz, Heather Keefe and Ginger Harris’ willingness to devote time to kick-off the event and share their successes and challenges was invaluable, and is truly appreciated by me, my team and the participants.” 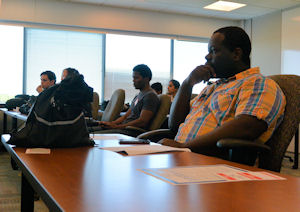 Fellow competitors watch intently as proposed applications are presented during the Hackathon.

Sullens and Schwartz judged the competition and scored the applications on creativity, usefulness of the app, and execution.

“It was great to be a part of an event like this that has such potential for making a positive impact on our local community,” says Schwartz. “The Marathon team did a fantastic job with the event, and I applaud their willingness to step up and do what they can to help the local community each year. I am also impressed with how much the developers were able to accomplish in such a short period of time, and plan on following up with some of the teams to further develop the applications they started, as I think it would be an invaluable tool, allowing us to find more volunteers.”

With the successful completion of its second Hackathon, Marathon Data Systems is already thinking of themes for its Third Annual Hackathon in 2015. If you are interested in joining the mailing list to receive updates on the next event, visit http://eepurl.com/WyiCv.