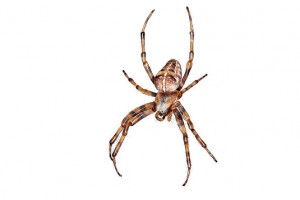 For spiders, however, social behavior is rare — less than 25 of the world’s 38,000-plus species exhibit it. One quasisocial species is Anelosimus studiosus, a member of the comb-footed spider family, Theridiidae (the family that also includes the common house spider and the medically important widow spiders). A. studiosus recently garnered media attention when scientists from University of Pittsburgh* described how the so-called personalities of the spiders dictate the jobs they perform within a colony.

In the United States, A. studiosus ranges from New England to Texas, forming tangled cobwebs in trees and shrubs to ensnare prey. The large communal webs that are built during times of prey abundance increase the size and likelihood of prey being captured. Food is shared among the spiders, with adults regurgitating food for consumption by spiderlings.

In their study, published in the scientific journal Proceedings of the National Academy of Sciences, researchers found two distinct personality types were common in colonies of A. studiosus — aggressive or docile — that defined the type of tasks they performed within the colony. Unlike many other social species, job duties weren’t defined by morphological differences (the spiders are all the same size and shape) but by behavior alone.

Previously, conventional arachnological wisdom held aggressive spiders did the lion’s share of work, subduing prey and guarding against hostile invaders. Docile spiders, on the other hand, acted as a kind of social parasite, freeloading off the hard work of their more aggressive nestmates. But it turns out docile spiders act as the colony’s babysitters, guarding eggs and feeding young. Aggressive spiders can’t be trusted with these tasks because the tiny spiderlings pose too much of a temptation and often wind up as lunch.

Social behavior in humans follows some of the same patterns. More aggressive pest technicians aren’t more likely to feast on baby spiders, but the techs’ personality traits do lend themselves to certain job functions within a pest management company. For example, an outgoing, charismatic technician who enjoys interacting with customers and persuading them to cooperate to achieve common goals might be an ideal candidate for commercial accounts, where much of the work is done through communication. By contrast, technicians who exhibit personality traits that favor independent work, attention to detail and the satisfaction of seeing a job done right might be an ideal fit for termite work. When developing your staff, consider the social behavior of your eight-legged adversaries and match the personality of each technician with his/her job duties to help ensure happier and more effective employees.

You can reach Dr. Fredericks, chief entomologist and VP of technical and regulatory affairs for the National Pest Management Association (NPMA), at jfredericks@pestworld.org.