Most Wanted: The 411 on the Odorous House Ant 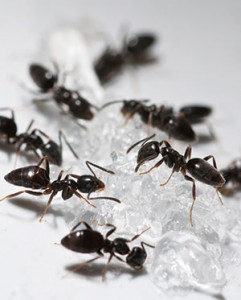 Odorous house ant (OHA) colonies are polygynic and can comprise 100,000 individuals. Photo courtesy of, and copyrighted by, Gene White, pmimages@earthlink.net

As the most abundant of social insects (estimated at 1 quadrillion at any given time), more than 12,500 of an estimated 22,000 species of ants are classified. About 1,000 species are classified in the United States, and 33 new species discovered recently in the Caribbean and Central America have been added to the total.

OHA colonies are polygynic and can be as large as 100,000 individuals. Workers are monomorphic (0.10 to 0.12 inch) and omnivorous, searching for carbohydrates, dead insects and meats. These ants will tend aphids and abscond with honeydew. Their modus operandi is to forage along established trails.

The terrestrial formicariums often trespass in mulch or under rocks and logs. They tend to break and enter structures after rainfall, especially if their honeydew is washed away. Their preferred hideouts include nests in wall voids and under toilets.

Dr. Mitchell, D.O., Ph.D., M.P.H., B.C.E., a board-certified physician and entomologist, is principal technical specialist for PestWest Environmental, as well as PMP’s Technical Editor. He can be reached at docmitchell@northcoastmedia.net or 515-333-8923.