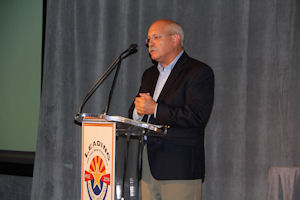 TUCSON—At the 24th Responsible Industry for a Sound Environment (RISE) meeting, the message was about the message itself.

Dan Stahl, vice president of marketing at OHP Inc., and incoming board chairman, said that RISE has a culture of staying relevant, and that means adapting the way the organization spreads it message. RISE, a national trade association that represents manufacturers, formulators, distributors and other industry leaders involved with pesticides, has embraced social media to spread the benefits pesticides provide consumers.

“We’re communicating with a different generation… a different set of society,” Stahl said. “We’ve become comfortable using Twitter and Facebook. A lot of key issues are taking place on Twitter.”

Karen Reardon, RISE’s vice president of public affairs, said that in the past 12 months, coverage of pollinators related to pesticides generated 206,000 mentions on Twitter.

“Everyone can do grassroots right now (on social media),” Reardon said. “Our opponents are using it to great effect.”

Reardon also said that RISE has had some great success in the New England area. For example, of the 14 pesticide bans proposed in Connecticut, most never made it to a vote, and the few that did were defeated.

“Generally, we’re very successful on the bills we see. We’ve come to a point where we’re very mature in our approach,” Reardon said. “We had a lot of activities where bills did not come to a vote, where bad news stories weren’t written. We are well positioned with whatever comes on the radar screen.”

Finally, Aaron Hobbs, RISE president, told the group that a new strategic plan had been created. It mapped out the organization’s path from 2015 to 2020.

“Our vision is an industry free to create inspiring and healthy places where we live, work and play. The only thing you have to worry about is out-competing each other,” Hobbs said. “If we can do that, then I’m putting myself out of business and I’m fine with that.”