The Pest Management Professional (PMP) Hall of Fame induction ceremony was held October 20 in Orlando, Fla., on the eve of PestWorld 2014.

Four industry leaders were honored at a black-tie reception that kicked off with a cocktail hour, which was followed by dinner and the award ceremony. 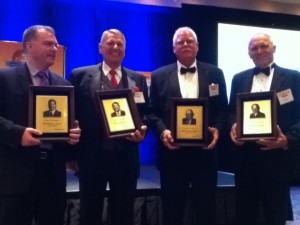 The PMP Hall of Fame was established in 1997 to recognize and thank those who have enriched the pest management industry. Ed Bradbury, Gene Harrington, Don Reierson, and Dempsey R. Sapp Sr. joined the ranks of 75 other inductees.

PMP Publisher and Editorial Director Marty Whitford got the evening off to a great start, welcoming back to the magazine’s staff Managing Editor Heather Gooch. She introduced each inductee with a brief video that showcased their contributions to the pest management industry.

Don Reierson acknowledged fellow Hall of Famer (Class of 2007) and friend of more than 30 years, Dr. Mike Rust, also in attendance. He expressed thanks to those in the industry.

Accepting the award on behalf of Dempsey R. Sapp Sr. was son D.R. Sapp Jr., who told the crowd his 96-year-old father would have loved to collect his plaque in person.

Gene Harrington, vice president of government affairs for the National Pest Management Association, showed appreciation for his wife and his colleagues, many of whom were there.