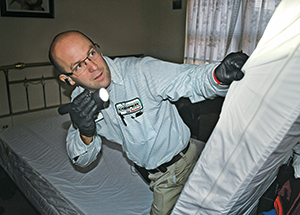 Geherty shows me how to properly flip and inspect a mattress and box spring.

Finally, an embedded reporter! In the trenches!

A journalist’s dream come true! Although this particular writer doesn’t have the stomach for traditional on-the-ground, wartime reporting, at last I was able to participate in covering a different battle — one being fought fiercely on the front lines every day by our readers: You, the men and women in uniforms of a different sort. The enemy: bed bugs. The battleground: a mid-level apartment in Hamilton, N.J. My disposition: Apprehensive. But I needn’t have worried. This charge was being led by Ron Geherty, a technician for Cooper Pest Solutions, based in Lawrenceville, N.J. He’s a seasoned pro, armed accordingly and ready to lead this layman through the paces of a bed bug inspection and treatment.

Preshow Prepping
On the drive to the job, Geherty explains we’re on a follow-up call to an apartment that he’s serviced twice before — where bed bug activity was primarily occurring in one bedroom, although some activity was found elsewhere in the dwelling. The property manager, who was responding to a complaint by one of the apartment’s tenants, initiated the service.

“Usually, if we get a call for one apartment unit, we’ll initiate inspection on all connecting units,” Geherty says. “Some jobs have even required us to look at units that are diagonal from the dwelling in question.” 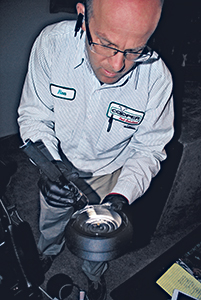 Geherty places a dead bed bug discovered during inspection into an interception device for examination.

Fortunately for the building manager of this complex, inspections of the apartments surrounding our target dwelling didn’t turn up any additional infestations.

Despite this being a follow-up service call, Geherty still preps as he would on an initial call, by pulling on heavy-duty gloves and grabbing his high-powered flashlight, a clipboard, an application canister and a giant roll of industrial-size trash bags. But before we head into battle, he makes sure to prep me.

“When doing bed bug jobs, we practice what we call ‘Care and Custody,’” Geherty explains. “That means a hands-only approach. We’re careful to never brush up against any furniture with our arms or legs, and to not let our clothes contact any furniture or fabric. You need to know how to handle furniture and flip mattresses without the threat of picking up bed bugs and taking them home with you.”

He doesn’t have to tell me twice.

Protocol and Procedures
Once inside, I immediately notice it doesn’t look like the tenants had done a thing to prep their living space for bed bug treatment. That is by design, Geherty says.

“We don’t want the client to do any prep work, outside of basic clutter reduction,” he adds.

By “clutter,” Geherty refers to excessive stacks of boxes piled against the walls or bags of clothes stuffed into closets — anything that might prevent him from reaching the baseboards and providing effective treatment. But he doesn’t want clients moving furniture or stripping beds. 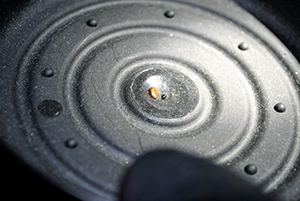 Geherty finds two bed bugs during his inspection, and examines them here.

The gigantic roll of trash bags soon reveals its purpose as Geherty moves to the first bedroom — site of the original infestation — and begins to peel bedclothes off the bed slowly. As he does this, he closely examines every article of linen.

“This helps us see what type of problem we’re dealing with, and keeps the tenants from throwing them in the closet or back on the bed, redistributing the bed bugs throughout the dwelling,” he says. “You can’t rush it, so we allow for this time when we schedule our visits.”

Geherty places everything he’d removed from the bed into one trash bag, which he ties and leaves that way for when the tenants return after the treatment.

“We highly recommend that before clients do anything else with what’s in these bags, they wash everything in hot water followed by a high-heat cycle in a dryer that same day,” he says, adding these instructions are left for the tenants to review when they return.

A general outline of dos and don’ts that will increase the treatment’s effectiveness are included on the list of instructions. The list also includes an explanation of why encasements are being used on the mattress and box spring, why they shouldn’t be removed for at least a year, and instruction not to disturb the interception devices left beneath each leg of furniture. The interception devices are especially helpful because they tell Geherty a few things. 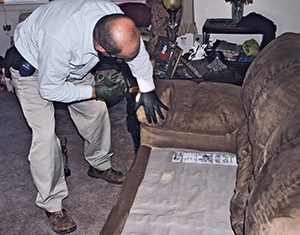 A high-powered flashlight like Geherty’s is an essential tool during bed bug inspections.

“If I inspect a device and find bed bugs in the outer well, there might be bed bugs coming from the piece of furniture or somewhere nearby,” he says. “Likewise, if I only find them in a device under just one of the furniture legs, I have to inspect extra carefully around that area of the room — nightstands, dressers and anything else.”

The mattress and box spring were already in encasements from the first visit. Using his flashlight, Geherty inspects them as closely as he did the bed clothing.

He inspects the zippers of the encasements and carefully stands up the mattress, before doing the same with the box spring, so he can examine both sides. Then he examines the metal bed frame and points out the green felt wrapped around all four corners of the frame where the metal meets the box spring.

“We put the felt there to protect the encasements because, in some instances, friction can cause the metal to tear a hole in encasements, which defeats the purpose of having them on,” he says.

Inspect, Treat, Repeat
At this point, I am almost feeling disappointed the inspection had yet to turn up anything, but then …

“I’ve found some fecal evidence and a fully fed first instar,” Geherty says, pointing to the plump little monster with his flashlight. “You can tell he’s had a bloodmeal because of the dark color and size of his engorged abdomen.”

He plucks the bug from the underside of the box spring, squishes it between his fingers, deposits it in one of the interception devices he’s removed to examine, and continues his inspection. Before long, he finds another bed bug — this time a third instar — stuck in the glue that binds the felt to the frame. This bed bug is still alive and kicking. He squishes this one, too, preventing it from escaping. 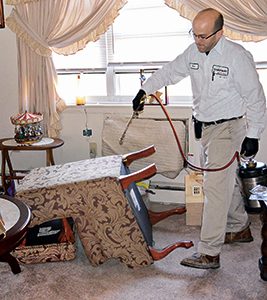 Once Geherty is satisfied with his bed inspection, he moves around the room, explaining the head of the bed is typically a hot spot. Because bed bugs like to stay close to their bloodmeals, they usually harbor within 2 ft. of their human buffets.

“On the initial service, we flip everything we can, look under and treat,” he says, pointing to a nightstand. “I’ll inspect carefully around the nightstand, but I don’t need to flip it because the underside has already been treated. Both bed bugs we found were immature and non-reproducing, which is a good thing. If I find any bed bugs — as few as 10 or so — I’ll hand-remove them and flush them down the toilet.”

If the infestation is significant, or if the tenants have used store-bought products to conduct their own treatments (which often just makes the bugs scatter), a steamer and vacuum cleaner are brought in from the truck to drive out the bed bugs from hiding and suck them up. But that wasn’t the case on this job. Previous treatments have been effective.

Tenacity Takes Time
With the bed stripped and the room thoroughly inspected, I step into the hallway so I’m not in the way while Geherty treats the hot spots. But we are far from done. He still has to go through the same process in the second bedroom and living room. Geherty moves like a man on a mission, a bug-hunting supersleuth — while I stand back and realize how much more time-consuming treating an apartment is than I first thought. And I’m only reporting the highlights. Space doesn’t allow for all I learned on my first ride along. I imagined how long it must take to treat a badly infested house. For Geherty, it’s all in a day’s work. He even seems to enjoy himself.

“I love doing bed bug work,” he says. “Although we use the same overall protocol for every one, each job is different. There are different levels of inspection, types of treatment, and reasons for why bed bugs are there in the first place.”

That day, Geherty reaffirmed my belief that I’m better suited to writing about pest management heroics. He confirmed what I already knew: It takes a professional — like Geherty — to get the job done right.