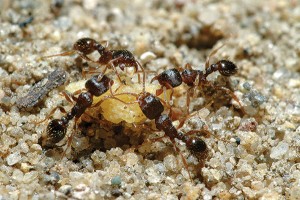 Few ants have what it takes to survive a Northeast Ohio winter — but some find a way. Photo: courtesy of, and copyrighted by, Gene White, pmimages@earthlink.net

Although ant pressure is more a rite of spring, winter’s freeze did not dissuade a pavement ant population in our reporter’s neck of the woods.

I have a personal grudge against ants. They’re the one pest with which I annually go to war. Traditionally, they don’t make their presence known in my apartment kitchen until the thaw of spring, which is typical for this part of the country (Pest Management Professional is based in Cleveland). But technicians do face the occasional winter ant job, as was the case for General Pest Control service technician Brett Lastafka. I hitched a ride with him to the first stop on his route one bone-chilling February morning.

Lastafka and his customer were kind enough to let me watch as he went to work, solving a stray winter ant issue.

After pulling on our blue plastic booties (to keep from tracking snow on the customer’s floor), we headed to the alleged scene of the crime. In this case, the crime was ant emergence in the room one least wants them to visit: the kitchen. Human or ant, if you’re looking for something to eat, you’ve come to the right place.

My first impression of the home and its kitchen was that both were immaculate overall. But ants had been spotted, instigating the service call. As I know from personal experience, however, the little buggers might not always parade around when you actually want them to — the better to prove their existence and offer behavioral clues that help write the recipe for eradicating them.

This client, however, was more clever than most. Earlier that morning, a glob of raspberry jam dropped from his breakfast toast to the kitchen floor. He saw the culprits come running and thought it better to leave the foodstuff in place, since it was helping to make their presence known and their trail readily visible.

Lastafka dropped to his knees to shine his flashlight along the path created by the bustling ants. They were moving back and forth between the raspberry jam and the small gap between the door and its frame at the threshold of the kitchen.

“Is this house built on slab?” Lastafka asked.

He seemed to know the answer before he finished asking the question: Affirmative.

“These are pavement ants,” Lastafka said. “When it’s cold, they survive by retreating under the home where the house’s slab foundation is heated by the ground underneath.”

Still, Lastafka notes, Tetramorium caespitum emerge for food when they can — and even the cleanest kitchens have nooks and crannies where they can find it.

Treatment strategy
This wise customer had made the job easier by leaving the food where it had fallen, because now Lastafka and I could see exactly from where the ants were entering the kitchen.

Lastafka reached for his trusty gel bait, and squeezed two or three drops in spots along the trail of ants. There was no doubt about it — these ants preferred the bait to the bread spread, almost immediately abandoning it and rushing for the dubious deliciousness of the bait. (One lone, confused ant continued to circle around the jam, like a lost child at the grocery store. It eventually caught on.)

“The bait won’t kill them here,” Lastafka told the customer. “So if you’re watching for them to drop dead on the spot, they won’t.”

He explained how the foragers dig into the irresistible bait, then hightail it back to the nest to share with the colony and queen.

With that, the most important part of the job — finding the source — had been done. After that, the rest of the time at this location was spent inspecting areas that are traditionally troublesome in most homes, and doing spray spot treatments in other likely ant zones and points of entry.

“We’re probably dealing with one colony,” Lastafka surmised. “But you want to make sure to take preventive steps and treat areas that look like they could be potential trouble spots, or areas where they’ve been observed in
the past.”

For a job like this, there’s no reason to move too far beyond the obvious affected areas. After a thorough inspection of those areas, and spraying around the baseboards of the nearby laundry room and bathroom, Lastafka had his first job of the day under his belt — and the first satisfied customer of the day to thank him for a job well done.

Will’s Lessons Learned
A few takeaways from this ride-along include:

⦁ In colder seasonal climates, homes with slab foundations are more likely to show signs of winter ant infestations, although they’re not common.

⦁ Find the trail, follow the trail, and chances are, you’ll identify the source.

⦁ Raspberry jam’s got nothing on gel baits when it comes to appealing to ants.

⦁ Preventive measures can be an important part of ant management.

⦁ The over-the-shoe booties worn by the technicians of General Pest Control are designed with smaller feet than mine in mind.

A small glob of raspberry jam is all it takes to bring the ants out, revealing the foragers’ trail in the form of an ant stampede. Photo: Will Nepper

General Pest Control technician Brett Lastafka shines a light on where the trail leads. The point of entry appears to be a small space near the kitchen door, where the kitchen tile meets the hardwood hallway floor. Photo: Will Nepper

Lastafka applies drops of gel bait a few inches apart along the length of the trail. Photo: Will Nepper

As soon as it’s applied, the gel draws nearly every ant away from the food to the bait, which they obviously prefer. Photo: Will Nepper

Lastafka practices due diligence by thoroughly inspecting potential trouble areas around the windows of a bathroom near the kitchen. Photo: Will Nepper

Finally, Lastafka spot-treats some areas around nearby baseboards as a preventive measure. Photo: Will Nepper