The USFS Presents its Annual Termiticide Report for 2014 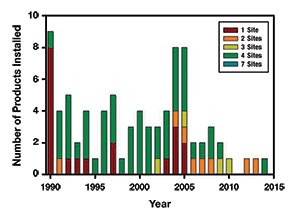 Fig. 1. Number of candidate termiticides installed each year by the Termiticide Testing Program.

For a termiticide to reach the American market where it’s available for purchase by pest management professionals (PMPs), it must be federally registered by the U.S. Environmental Protection Agency (EPA). Chemical manufacturers wishing to register their products as a termiticide submit a registration package to the EPA containing fairly standard, nontarget toxicity and environmental fate studies, as well as efficacy data. The EPA uses all these factors to determine termiticide registration.

The U.S. Department of Agriculture Forest Service (USFS) develops efficacy data to satisfy the registration requirements for candidate termiticides. It is based on the results of five-year, small-plot field tests performed on four national field sites located in Arizona, Florida, Mississippi and South Carolina. For nearly 80 years, the USFS termite staff, under various names, has evaluated termiticides in its ongoing Termiticide Testing Program.

Fig. 1 illustrates the number of products installed on USFS field sites since 1990. The chart shows the number of new products installed has declined. For example, in 2014, just one candidate product was installed on all four field sites. As previously reported, the reduction of candidate products will affect the termiticide market. As older termiticides become unavailable, there will be fewer new products to replace them — a condition that leads to reduced choices for PMPs and homeowners. This situation was discussed previously in the 2011 Termiticide Report (PMP, February 2012). However, four field-testing agreements were still active in 2014, representing three candidate products. 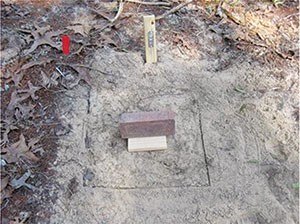 Fig. 2. After drying, a 6×6-in. pine board is centered on the exposed, termiticide-treated soil and held in place with a brick.

Test methods
Evaluations of soil-applied termiticides are specified by the EPA in its Product Performance Test Guidelines (OPPTS 810.3600). There are two accepted protocols for testing these products: the ground board test and the modified ground board (or concrete slab) test. Ten replicates of each concentration, including water-only controls, are installed for each candidate termiticide in each of the four national field sites.

For the ground board test, a 17×17-in. area is cleared of debris, roots and rocks, and treated with the candidate termiticide. After drying, a 6×6-in. pine board is centered on the exposed, termiticide-treated soil, and held in place with a brick (see Fig. 2).

In both test types, candidate termiticides are applied to the soil at the preconstruction volume of 1 gal. per 10 sq. ft. For each plot, the wood is evaluated for termite damage annually using a simple scale. The presence or absence of live termites infesting test blocks or boards  also is noted. 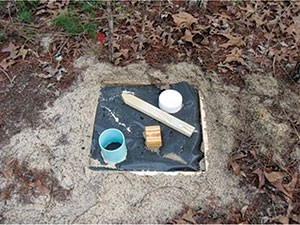 Fig. 3. A concrete slab plot after treatment before concrete pouring.

Performance standards
For candidate termiticides seeking federal registration, there’s one standard: the EPA’s Product Performance Test Guidelines (OPPTS 810.3600). Following federal registration, the efficacy data are submitted to the state pesticide regulatory agencies for their review. States retain the right to accept or refuse the sale or use of a particular product within their borders.

Some states have even developed their own standards for acceptance of termiticides based on product performance. In 2003, for example, Florida developed the Florida Termiticide Efficacy Rule (5e-2.0311, FAC). These two standards apply to different applications of the products: the Florida Rule applies to termiticide application for new construction only, and the EPA Guidelines apply to pre- and post-construction applications.

In the EPA Guidelines, a candidate termiticide should prevent termites from penetrating treated soil in 100 percent of the test plots for at least five years at the lowest label rate that will be registered using the concrete slab test method. That’s why the data in the EPA sections of Tables 1 and 2 are reported in years of 100 percent control.

Success for a candidate termiticide under the Florida Rule is defined differently than under the federal guidelines. The Florida Rule only considers data from southeastern states. To pass this rule, a candidate termiticide must prevent damage more severe than ASTM 9 (equivalent to a Gulfport rating of 1) to more than 90 percent of all test blocks for at least five years in one or more of the southeastern sites using the concrete slab method. A minimum of 10 plots is required. 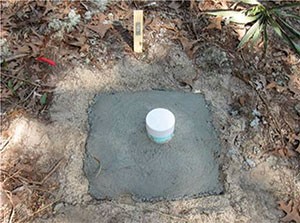 All test plots are evaluated annually, and the rule is applied for each year independently. In other words, previous or cumulative infestations of plots aren’t considered.

Latest test results
Tables 1 and 2 provide repellent and non-repellent termiticide evaluation results collected through 2014. Similar to last year (PMP, March 2014), Altriset (SC formulation containing 18.4 percent chlorantraniliprole) is the only product for which new data can be reported. In the 2014 concrete slab data, Altriset — at 0.05 percent active ingredient (AI), the label rate — reached the end of its years of 100 percent control in Mississippi. All other locations and concentrations remained the same as the previous report (PMP, March 2014).

For ground board plots, the 0.25 percent AI rate of Altriset reached its final year in Florida under the Florida Rule. All Altriset plots will continue to be read annually.

While it’s a difficult standard to meet for product performance, the EPA’s Guidelines are a valuable tool for determining termiticide efficacy. However, there’s a difference between rules and guidelines: Rules must be followed by regulators, whereas guidelines aren’t required to be strictly followed.

The EPA’s primary mission is protecting human health and the environment. Because of that mission, federal termiticide registration is based on more than just efficacy. The product’s toxicological and environmental impacts also are considered. The EPA may register products that don’t adhere strictly to its efficacy guideline. State regulators, on the other hand, tend to be more concerned with efficacy because the relative safety of the product has been considered before federal registration. As an example of a state standard and a rule, compliance with the Florida Rule is mandatory for termiticide regulators in Florida. 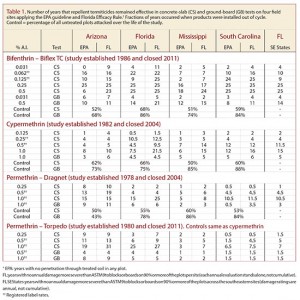 Conclusions
From its initial start in the 1930s, and the work of several generations of scientists and staff, the USFS Termiticide Testing Program has continued to serve the public and industry by providing unbiased efficacy data for state and federal regulators. As of this writing, the testing program has provided performance data for all termiticides currently registered in the U.S.

By providing these reports, the efficacy data of registered termiticides is made available for consideration by the pest management industry, pesticide manufacturers, regulators and the American public. This allows pest management companies to determine the best products to offer their customers. It also allows the public to make informed decisions about protecting their homes. During the coming years, the USFS will continue to provide updated information about these products.

New administration and scientific staff
On Oct. 1, 2014 — the beginning of fiscal year 2015 for the federal government — the termite team of SRS-4552 (insects, diseases and invasive plants) was moved administratively from the Southern Research Station to the USFS Forest Products Laboratory in Madison, Wis. The Forest and Urban Insect Ecology Research Team, is now part of the Durability and Wood Protection unit (FPL-4723) under the leadership of Carol Clausen. 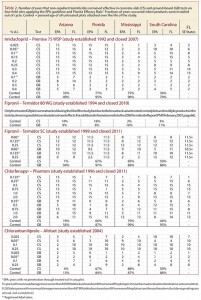 The termite team personnel, equipment and facilities are overseen by the FPL, but will remain in Starkville, Miss., where they’ve been located for 19 years. Because of the distances, Dr. Thomas Shelton is the leader for the termite team. During the past four months, a new technician and two new research scientists joined the termite team in Starkville.

Dr. Juliet D. Tang joined the team as a research forest products technologist. She has a master’s degree in entomology from the University of Massachusetts, and a doctorate in forest resources from the Department of Forest Products at Mississippi State University. Her experience in pheromone biology, insecticide resistance and molecular biology complement the FPL’s mission to improve wood durability through basic and applied research. She’s particularly interested in understanding how genes of microbes and termites govern their physiology, behavior and interactions so novel sustainable wood protection agents can be developed.

Dr. Mark Mankowski holds a master’s of science degree in entomology and a doctorate in forest products from Oregon State University. He has researched Pacific dampwood termites, bark beetles, wood decay and carpenter ants. His postdoctoral work on the Formosan subterranean termite was conducted at the University of Hawaii.

Mankowski also has worked for U.S. Borax as a research and development specialist in the borate wood preservation/biocides division. He has worked with the product stewardship associated with biocides, and the development of testing and treatment standards associated with chemical wood preservatives. His current role uses his expertise in entomology, termite biology, and forest products durability to conduct and report scientific research associated with termites, insect-fungal interactions, wood decay and the investigation and development of measures to enhance wood products’ durability.