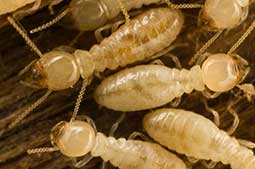 An entomology professor at Louisiana State University who has been checking termite population trends in Baton Rouge doesn’t like what he sees: The number of Formosan subterranean termites in the area is on the upswing. The Baton Rouge, La., daily newspaper The Advocate says since 2009, Gregg Henderson has used light traps to monitor the number of termites in the area. “In 2009, there was an average of 32 of these winged termites caught per trap during the entire swarm season, which runs primarily in May but can extend into June,” The Advocate reports. “By 2014, the average jumped to 596 winged termites caught per trap.” Swarming termites are on the rise as well, according to Arrow Termite & Pest Control Operations Manager Jacob Cohn, who is quoted in the story. Residents are advised to contact a professional who can conduct a free inspection and provide tips on how to help keep termites away. Check out the post here.

How to curtail cockroach callbacks

5 ways to show you care during the holidays