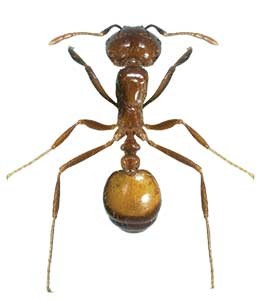 Indigenous to South America, Solenopsis richteri (roughly translating to “the very cruel”) was unintentionally introduced into the southeastern United States via Mobile, Ala., around 1918. Possibly introduced from ballast soil in cargo ships, its common name today is the black imported fire ant (BIFA).

Both species have an impact on agriculture through damage to crops, equipment and wildlife. IFA (BIFA, RIFA, and what some researchers contend are a hybrid of the two species) infest more than 367 million acres of Alabama, Arkansas, California, Florida, Georgia, Louisiana, Mississippi, New Mexico, North Carolina, Oklahoma, Puerto Rico, South Carolina, Tennessee, Texas and Virginia.

IFA are significant nuisances and influential public health pests. When a colony is disturbed, many female worker ants become aggressive. When attacking, numerous ants simultaneously plunge their mandibles into a victim’s skin, inflicting numerous painful, burning stings. A severe reaction can occur for those allergic to IFA venom. In rare cases, anaphylaxis — a severe, occasionally lethal reaction — results. Patient injection of epinephrine into the outer thigh via a prescribed single-dose injector is the current rescue treatment.

There are two typical treatment methods pest professionals have at their disposal:

1. Mound-to-mound treatment — This insecticide application can be done as a drench, injection, dust or bait.

2. Broadcast treatment — An area application of bait or granules using a spreader.

As part of a state-of-the-art, cyclic integrated pest management (IPM) program, there are several professional products that offer control in area-wide applications. Bait formulations are particularly effective, as foraging behavior delivers a systemically lethal dose to the ant population. 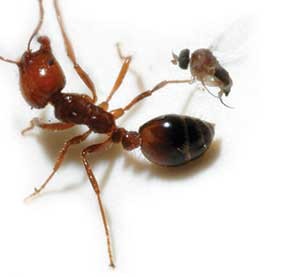 Off with their heads
Within imported fire ant (IFA) pressure areas, the U.S. Animal Plant Health Inspection Service (APHIS), the Agricultural Research Service (ARS), universities and state officials have implemented — and maintain — IFA biological control programs via the rearing and release of predator phorid flies (Pseudacteon spp.). From 2002 to 2009, P. tricuspis and P. curvatus were released. These phorid fly species are established in more than 65 percent of the IFA quarantined areas. Succeeding the first release, P. obtusus and P. cultellatus were introduced from 2010 to 2014 and are already established within a few areas.

1. Phorid flies inject eggs inside the bodies of fire ants.

2. The phorid fly larvae emerge, invading the head of the ant.

3. The brain is consumed, and the ant’s head decapitates, allowing emergence of the adult fly.

This overall process interferes with ant foraging, which reduces competitive success over native ant species. Although it’s not meant to be the sole control measure within integrated pest management (IPM) strategies for IFA, phorid flies are proving to be valuable tools.

You can reach Dr. Stuart Mitchell at docmitchell@northcoastmedia.net.

- It’s better to be blue