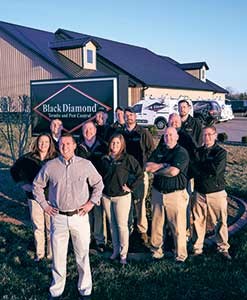 Keith “Junior” Duncan Jr. is the CEO of Black Diamond Termite & Pest Control, which has been servicing southern Indiana and northern Kentucky since 1940. Duncan represents the third generation of ownership for the company, which became the largest local pest management company in that region under the leadership of his father, Keith Duncan Sr.

“That prepared me for my eventual role as the company’s general manager,” Junior says. “After several years doing that, I eventually graduated to become an owner and vice president, before finally assuming my current role.”

Decades of Diamonds
Much of Black Diamond’s early growth throughout the ’80s and ’90s can be attributed to Senior’s determination to maintain the highest standards in pest management and word-of-mouth advertising from satisfied customers.

“And I’ve tried to expand on the work and vision of my father by implementing my own ideas,” Junior says.

Under Junior’s leadership as CEO, new marketing efforts were implemented to increase brand awareness and internal processes put in place to facilitate the company’s rapid growth. According to Junior, those efforts continue to pay off in all areas of service — perhaps most notably, in ant management.

“We expect this year’s ant revenue to be even better than last year because of the general company trajectory,” Junior says, attributing Black Diamond’s success to its constantly growing reputation for solving pest problems. “Our customers understand the difference in the service we provide, and help spread our reputation.”

Curbing callbacks
About 60 percent of Black Diamond’s ant revenue stems from residential jobs, where carpenter ants are the usual suspects instigating service calls. While pavement ants, odorous house ants, acrobat ants and pharaoh ants also turn up, it’s the carpenter ant that lives up to its name by continuing to build revenue. 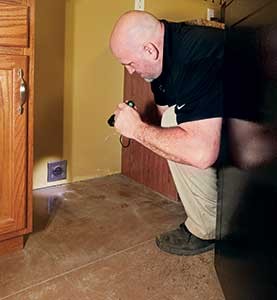 Despite being less omnipresent than the carpenter ant, of the few callbacks Black Diamond receives, the pharaoh ant is most often the instigator, Junior says. On the occasions where an ant treatment callback does occur, Black Diamond sends one of its senior technicians to take control of the situation.

“They’ve been through the battles and are able to think outside the box more when it comes to complicated ant management situations,” he says. “This also helps us achieve our goal of complete customer satisfaction. While most customers are understanding where more severe infestations are concerned, their patience runs thin quickly.”

Tools for the trained
Black Diamond most often employs gel baits and liquid insecticides when going into battle with the mighty marching ant.

“In the hands of a properly trained professional, we’ve found them to be very effective,” he says. “Whether it’s ant management or pest control in general, the biggest obstacle to success is finding, training and keeping technicians who have the desire to succeed and the ability to pay careful attention to detail.”

Attention to detail is a key ingredient for success, according to Junior.

“Technicians need to know not only the points of ant entry and harborages, but be able to identify food sources and any hindrances, such as sanitation issues or vegetation, that may exist,” he says. “A technician can’t handle ants with a cookie-cutter process for every ant job.”

Any tech who doesn’t take that wisdom to heart is doing the customer and the entire pest management industry a disservice, Junior says.

Communication is key
“In this industry, opportunity comes from awareness,” Junior says. “Most people who have ant problems first think about what they can do rather than thinking about a pest management professional.”

Junior believes the industry should continue promoting the advantages of having a skilled professional handle ant problems, so when issues arise, people’s thoughts turn to PMPs rather than a DIY product.

“The industry needs to do better letting the consumer know to call us first.”

Junior would also like to see the industry improve communicating with the public about pest management’s professionalism.

“We should keep looking for ways to let them know that being a PMP is honest work that pays more than a living wage, and improves the quality of lives,” he says. “The public should see our industry as a place they would want to work, so we can attract better-skilled people.”

Specific to ant management, Junior says communication between manufacturers, distributors and legislators also is essential because restrictions on important ant management tools create an obstacle with a broad reach.

“I’d like to see certain product restrictions loosened so we have more tools at our disposal,” he says. “The more tools you give a properly trained technician, the better the customer is served. Unfortunately, it seems likely technicians might be forced to work with fewer tools in the future.”

Junior says he hopes he’s wrong, and sees promise in the industry, with manufacturers, distributors and legislators working together.

“Hopefully together they can loosen current — and avoid future — restrictions,” he says.

Keith “Junior” Duncan Jr., CEO of Black Diamond Termite & Pest, has gone into countless battles against ants of many kinds, but the biggest, baddest battle of them all involved multiple carpenter ant colonies.

“It was a wood-sided home with visible moisture damage,” he recalls.

Making conditions even more conducive were overhanging trees, which made contact with the structure in multiple places.

“We worked with the homeowner to correct some of those contributing factors, and gained complete control by the third treatment,” he says.

Despite the size of the battle, Junior is still hesitant to label this particular job the toughest the company has faced.

“It’s difficult to put a label on a tough ant job, primarily because proper inspection, identification and control prevent tough situations,” he says. “Typically, callbacks result from some deficiency in that process, and we do what we can to not let that happen.”

That said, Junior admits there are many lessons to be learned from any difficult job.

“Every one illustrates the need for the technician’s approach to be thorough and disciplined,” he says. “But the large job in question illustrated more than anything how important it is to involve the customer in the process. The reality of pest management is that proper communication with a customer can sometimes be more effective than the application of any product.”