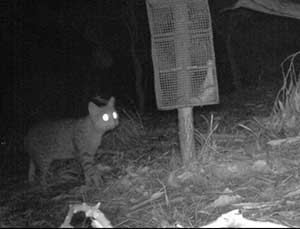 Are hidden cameras among your arsenal of pest management tools? They are in Australia, where the high tech equipment helps biologists determine the effectiveness of their pest management efforts, National Rural News reports. They set up cameras in Barmah National Park to monitor animal activity. Animals native to the area — koalas, possums and kangaroos — are frequently caught on film. Pests that regularly make an appearance include foxes and rabbits. And cats. In fact, biologists said they didn’t expect to see so many felines. “You don’t often see cats in the park but the data suggests it’s quite common,” Tim Barlow, project manager for the Goulburn Broken Catchment Management Authority, told National Rural News. The cameras also captured pigs; last year, the Sporting Shooters of Australia killed 28 at the Park’s behest.