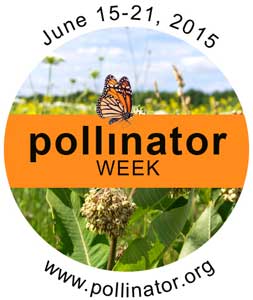 In case you missed it, last week was National Pollinator Week (June 15 – 21). The celebration was initiated and is still managed by the Pollinator Partnership (P2). It was unanimously approved by the U.S. Senate eight years ago and has occurred one week in the middle of June every year since. The Senate designated it a necessary step toward addressing the issue of declining pollinator populations. It’s since become an international phenomenon, as more and more citizens of planet Earth tune in to the important role bees, birds, butterflies, bats and beetles all play in the global ecosystem.

P2 is a 501(c)(3) nonprofit organization headquartered in San Francisco. According to its online mission statement, P2 “works to protect the health of managed and native pollinating animals vital to our North American ecosystems and agriculture.” The group considers its North American Pollinator Protection Campaign (NAPPC) the most important project managed by the organization. Through it, the NAPPC works in coordination with existing local, national and international pollinator protection plans that focus on individual species, genera, families or classes of animals. The Campaign also coordinates with existing projects that address specific pollinator habitats or migratory corridors.

According to theP2, Pollinator Week is a week to get the importance-of-pollinators message out to as many people as possible. A U.S. map at pollinator.org/npw_events.htm provides visitors access to Pollinator Week activities occurring coast to coast.

Although the topic of pollinators is riddled with controversy stemming from efforts to understand the decline in bee populations in recent years, there’s no denying that pollinator health is a serious and significant issue for the industry, as well as the planet.

Partnerships with local, regional, and national governments; corporations; and universities are the foundation of Pollinator Week and, to date, companies such as Bayer, FMC, Orkin and Syngenta all lent a hand in bringing recognition to the increasingly important topic.

While we’re past the official timeline (the nation has since moved on to today being both National Onion Ring Day and National Chocolate Éclair Day, and of course, THIS week is National Mosquito Control Awareness Week), it’s never too late to get involved and educate customers while simultaneously showing them that your company is engaged in spreading awareness. If you or your company would like to organize an event for next year’s National Pollinator Week, visit Pollinator.org to find out how to get your company’s name on the site’s map of National Pollinator Week events.