Sheperspective: The Scoop on Mouse Poop 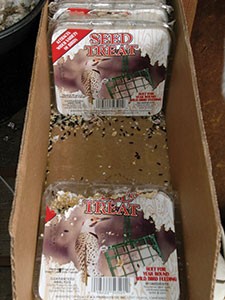 A cardboard box full of packaged bird feed is the equivalent of a mouse resort and spa (and latrine). Photo: courtesy of, and copyrighted by, Gene White, pmimages@earthlink.net

Mouse droppings are as important to PMPs as they are to mice.

We call them droppings because the mouse drops them. They are not placed, set, positioned or thrown. Where the mouse goes (in either sense of the word), there are the droppings.

Only two groups want to see mouse droppings: pest management professionals (PMPs) and other mice. Everybody else has an entirely different view. For mice, they indicate a familiar environment. The droppings and attendant urine offer a wealth of information about the mouse that dropped them. For PMPs, droppings are pest evidence and indicate precisely where the mice have been active.

If they aren’t removed, droppings will remain for years, and sometimes even decades. It is generally considered the client’s responsibility to clean up mouse droppings, and some clients actually do. However, many accounts ignore them, leaving the hapless technician with a dismal choice: Clean them up or let the droppings accumulate. In areas of high mouse pressure, the droppings can build to incredible numbers throughout the years.

It wouldn’t be so bad if we could tell how old they were by examining them. There is no sell-by date; you cannot cut them in half and count their rings, and they have no version number (“Droppings 4.0”?). In short, after you have seen them once, they just make the job more difficult.

Droppings as monitors
The savvy technician uses mouse droppings to make precise trap and bait placements. If there are old droppings present, it is difficult to separate new activity from old activity. The time taken to clean up a few droppings pays big dividends at the next service, when new droppings indicate continuing mouse activity.

Similarly, it is important to clean up accumulations of mouse droppings at the onset of a new account. Where there is seasonal mouse activity, it is crucial to get them cleaned up before the next invasion. Food plants and other food-handling establishments should be cleaning up all debris, especially mouse droppings, because they can render an area unsanitary.

There is a common myth that devices work better when they have droppings in them, because the odors attract mice. The droppings can be dumped out, but those odors can’t. Leaving the droppings creates several problems. Auditors, health inspectors, and the competition consider droppings to be evidence of current activity, unsanitary conditions and poor service. Not to worry, however: Mice have been entering traps and stations without droppings since mouse control started.

Mouse droppings are not present in every account, nor should they be. But when we find them, it’s important to learn what we can from them. Traps and bait stations should be cleaned of all droppings every service. Only then will they continue to be as important to us as they are to the mice.