Web Exclusive: Why the Opossum Successfully Lives in the Shadows of Humans

As a pest management professional (PMP), how extensive is your knowledge of opossums? When speaking with customers who are experiencing problems with this animal, a few interesting facts will help you build credibility, convey your knowledge and professionalism, and foster good customer relations. These conversation points and confidence builders will help to steer the dialogue away from the unpleasant business at hand: humanely dealing with a nuisance animal problem.

The opossum makes its way to California
In 1890, the Virginia opossum was introduced to southern California near Los Angeles. The population became well established and expanded into nearby Ventura County in 1924. A group of immigrants, originally from Tennessee, imported an additional group of opossums from that state into Central California near San Jose in 1910. The live opossums were sent as food items, as individuals from this region of the United States considered opossums a delicacy at the time.

Several animals escaped from their confines over time, and provided one of the initial populations of opossums in this region of California. An entrepreneur introduced another group of opossums from South Carolina to a farm near Visalia, Calif., in an attempt to raise opossums as fur-bearing animals. At that time, opossum furs were being used as an inexpensive fur trim for some garments and hats. The endeavor failed, however, and the fur farmer simply released the remaining animals into the nearby countryside. 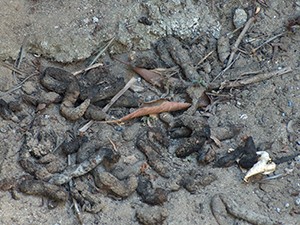 An opossum latrine area with many scats. Photo by Dr. Hanif Gulmahamad

Since these introductions, the opossum has thrived in California and expanded its range over considerable territory in the state. During the past century, the Virginia opossum has expanded its distribution into the Pacific Coast states and into southern Canada. It is now reported to range from Baja California to British Columbia. Once a creature of the forest, this animal is now living quite successfully in the shadows of modern culture. It is a generalist that is very adaptable to changing conditions and varied environments. Without food, water and harborages provided by humans, especially in southern California, this denizen of the wilds could not have been so successful in increasing its abundance and distribution in manmade environments.

Why the opossum successfully lives among humans
About 35 years ago, when I first started working in the structural pest management industry in southern California, I rarely encountered opossums in cities and urban environments. The few opossum problems I handled were from customers who lived in the foothills, in proximity to riparian locations such as near the Santa Ana and Los Angeles Rivers, and in rural areas. Today, though, opossums are increasingly coming in conflict with humans everywhere in southern California. These animals are causing problems in and around human habitations, workplaces, entertainment venues, schools, ballparks and other areas. 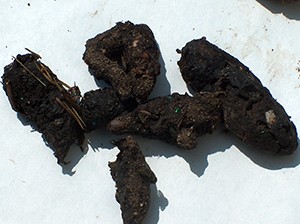 If you look closely at the opossum scats in this picture, you will notice tiny, iridescent specks of Green Fruit
Beetle exoskeleton. This animal will readily eat adults and larvae of the Green Fruit Beetle, Cotinis mutabilis. Photo by Dr. Hanif Gulmahamad

This begs the question: Why is this animal so successful in human-created environments? Here are 10 probable reasons: 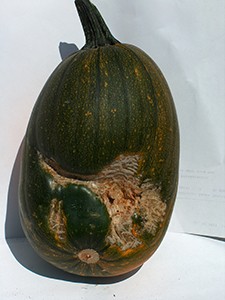 What to do about opossums?
Once they find a habitat that supplies their basic needs, opossums keep visiting the location regularly. Homeowners with dogs that have free range of their yards at night are not bothered by these creatures, because opossums dare not descend from the tops of fences, which they use as highways. When dogs are not present in the yard at night, however, opossums rule the roost. These denizens of the dark just move in and take over.

For instance, my next-door neighbor has two dogs, and his property is free of opossums. Within a three-month period, however, I was forced to trap and remove six opossums from my property, which is a typical tract home in a neighborhood that was built in 1991. These animals have complex, but loose social relationships, with overlapping home ranges. When one animal is removed, another quickly takes over its territory, particularly when high populations exist in the area.

The California Fish and Game Code classifies opossums as nongame mammals. If they are damaging crops or other property of which you are the owner or tenant, you may control them using any humane, legal means. The regulations prohibit the relocation of captured wildlife without written permission from the department, however.

In California, structural pest management has been loosely defined as pests in, on, or invading structures. Opossums marauding in your yard and backyard gardens do not fall within the purview of a structural pest control license, which is issued by the Structural Pest Control Board. You need a Qualified Applicator License (QAL) in the category: Residential, Industrial, and Institutional pest control, issued by the California Department of Pesticide Regulation (DPR), to address wildlife issues. The following statement occurs on the reverse side of a QAL wallet license: “This License does not authorize any person to engage in the Business of pest control. A DPR Pest Control Business License is required, in addition to this Qualified Applicator License to engage in the Business of Pest Control for hire.” This distinction is not clearly understood by many structural pest management operators in the state, and it is frequently overlooked and ignored. However, in case of litigation, you will be painfully reminded of this requirement. PMPs should check with their local regulations before they accept the next opossum call.